This past weekend, we made the trip to Oklahoma City.  Sheena, Layla and Mom flew out on Tuesday night.  Stan (Sheena’s cousin), Shane (Sheena’s brother) and I drove up on Friday.  Sheena has a bunch of family there and when she was younger, they would spend a good chunk of their summers in OKC.  She wanted Layla to experience the same thing with her lil cousins, so we made the trip.

Friday morning, we headed out at 6am.  With a few stops along the way, we ended up getting to Vinod’s house at 1:30pm.  (Vinod is one of Sheena’s cousins, by the way).

There was a lunch at Vinod’s house, so everyone was going to meet up there.  We apparently were the first one’s in.  Everyone else started to trickle in shortly after.  It was nice to hang with Sheena and Layla again after a few days of being solo.

A lot of this trip revolved around eating.  After lunch, we decided to go to Braum’s.  It’s an ice cream shop (located at every corner) that Sheena would frequent on their visits to OKC.  So we made it a point to go there everyday!

Vinod has a beautiful home.  It sits on an acre, has enormous amounts of space (including a 5 car garage, which was my highlight of the weekend).  In addition to an awesome house, they had an above ground pool.  After our adult hang time at Braum’s, Sheena and the kiddos took a dip in the pool.

The guys chilled in the patio and chatted while everyone else enjoyed the pool.

After pool time was over, we headed to Nancy’s house (which is equally awesome) to get settled in.  Dinner was at Ancy’s & Nancy’s parent’s house (another set of Sheena’s cousins).  Vinod and Nancy are siblings and Ancy and Nancy are sisters.  Their mother’s are Sheena’s Dad’s sisters, in case you were wondering…

After dinner, we headed back to Andy and Nancy’s house and had game night.  I was hesitant to play simply because we had just drove 8 hours and was out and about from the moment we got in.  But once the games got started, it was actually pretty fun!

Saturday morning was very relaxed (for me).  I slept in till about 9am.  Once I finally got out of the room, I realize that the guys (Andy, Stan and Shane) went to the gym.  I kicked it with the ladies and kiddos, which was great.  Once the guys got back, it was time to head to Vinod & Nancy’s parent’s house for lunch. 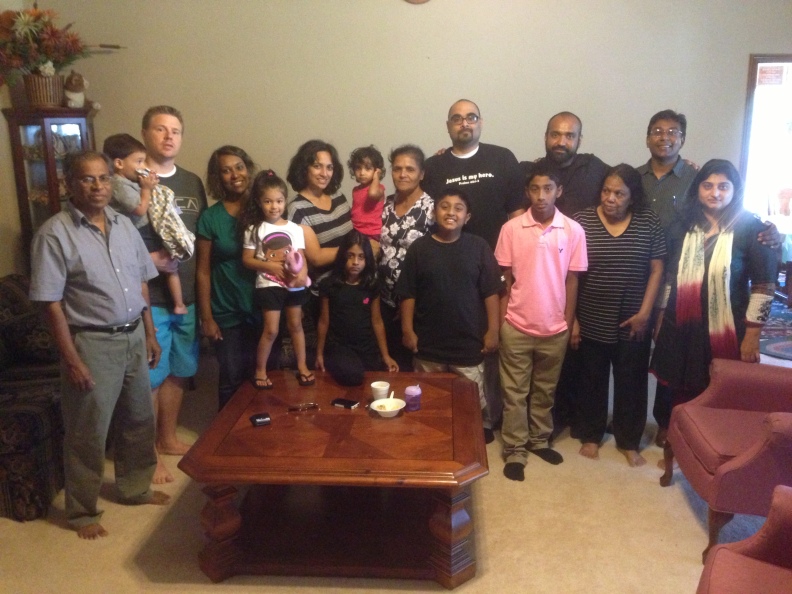 I thought that after lunch, we would head out somewhere just to scope out the town a bit (and make another trip to Braum’s), but we ended up in a great conversation with Vinod & Nancy’s dad.  It was nice to just sit and have a though provoking chat for a while.

After some down time, we made our way to the Stockyards to have dinner at the Cattleman’s Steakhouse.  Apparently it’s one of the top ten spots to check out in OKC.

Being that it’s one of the top 10 spots to check out… it came with an hour wait.  But we were able to walk around the Stockyards and snap a few pics.

They even had a horse carriage to bring you to and from your car. 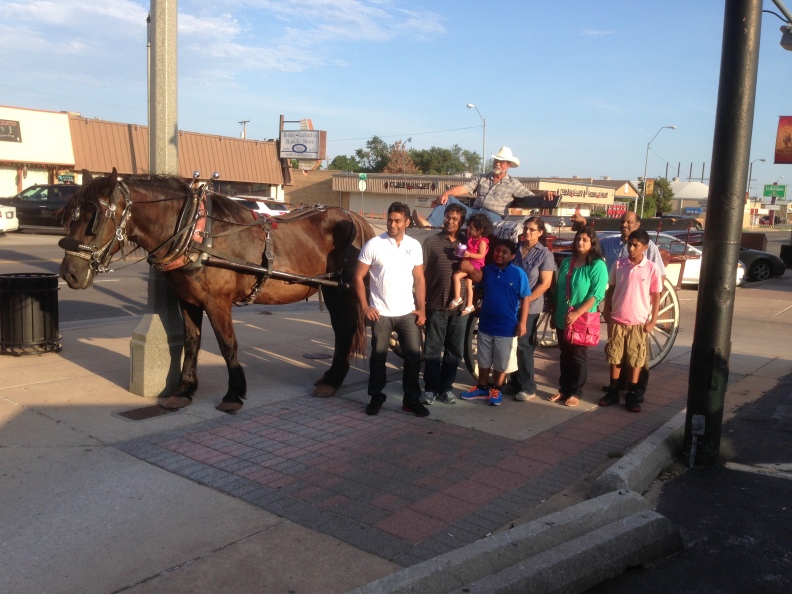 We finally got our seats and got our food pretty quickly.  Great service and pretty decent food as well.  It’s not the best steak I’ve ever eaten, but it’s still really good and well worth the wait. 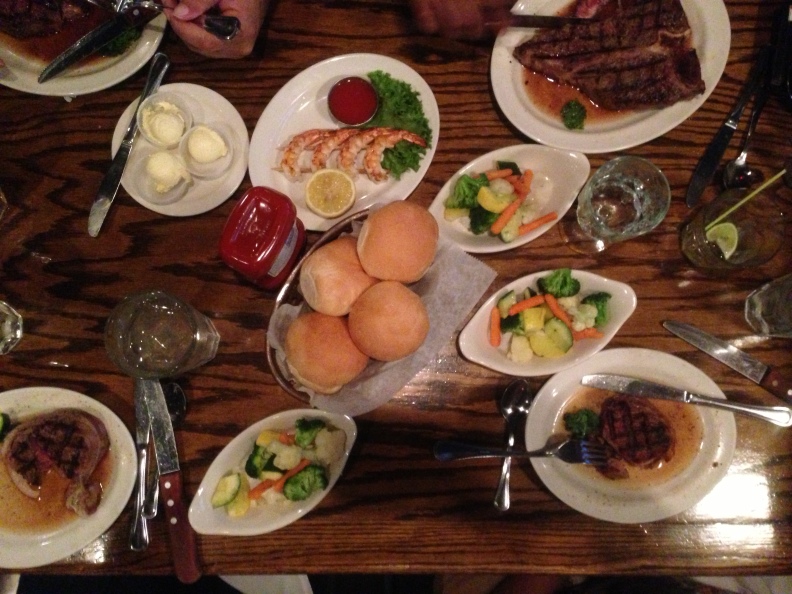 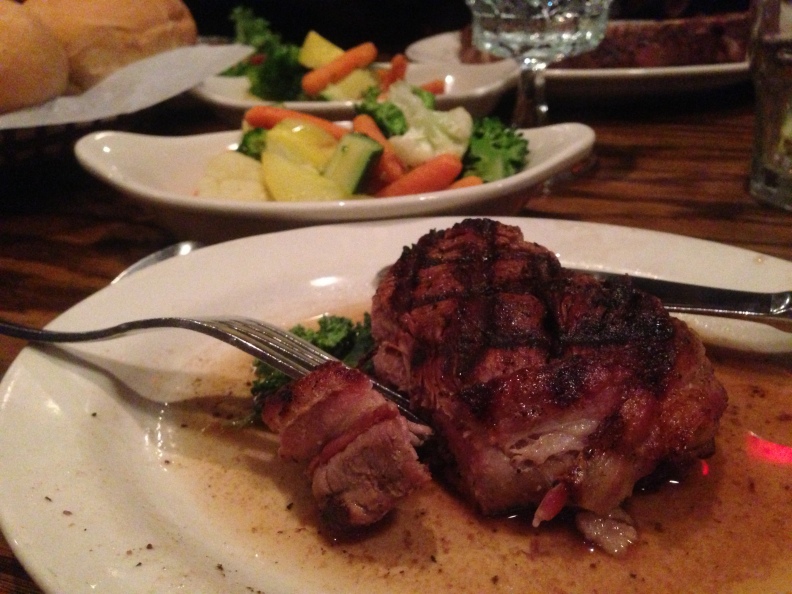 We took the horse carriage back to our cars just for fun and headed to Bricktown.

In Bricktown we just walked around.  They had some “breakdancers” doing their thing so we watched that for a bit.

After a while, it just got too hot, so we made our way back home…. but not before we stopped by Braum’s for our last hit of Ice Cream.  After such a long day, Layla was pooped, but she loved Braum’s so much that she fell asleep with a spoon in her hand. 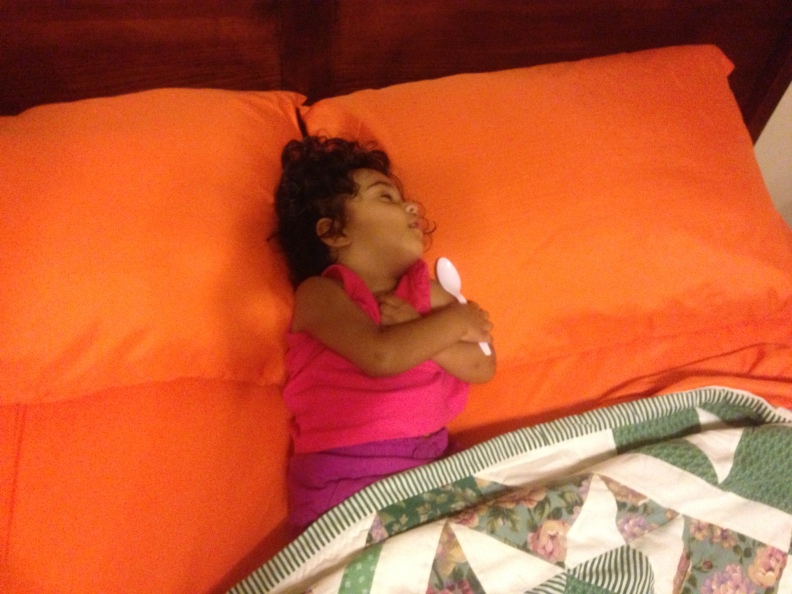 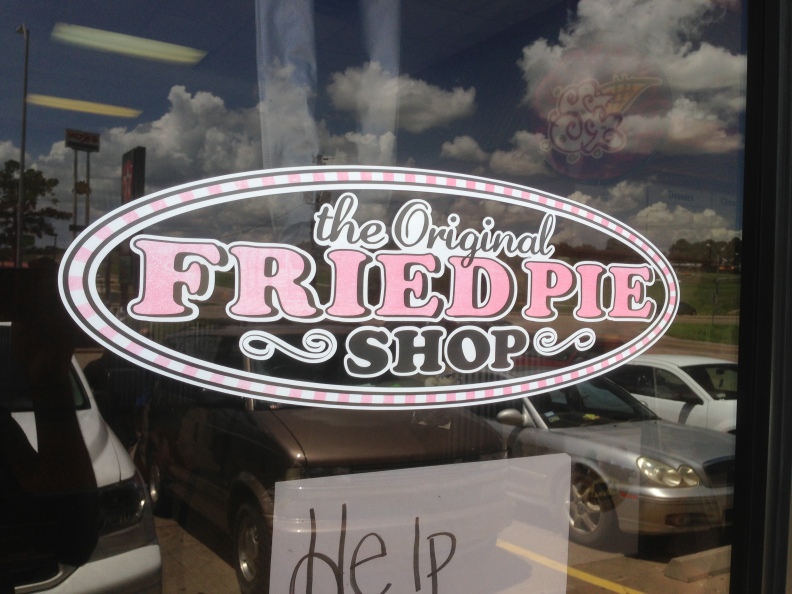 This was after we had lunch.  It was fate that we even stopped here.  Layla said that she pooped, so I basically pulled over to the next exit.  As I pulled into the nearest parking lot, it just so happened to be the parking lot of the Original Fried Pie Shop.  Needless to say, it was awesome.  Freshly fried with fresh ingredients… what else could you ask for?!  To top it all off, Layla didn’t even poop.  She was just saying it for no reason.  So we shouldn’t have even stopped.  I believe that God was with us on this journey not only for giving us safe travels…. but delicious surprises!

For me, it was a pretty quick trip, but I’m glad that Sheena and Layla were able to spend time with family.  The family were all great hosts and bent over backwards to make sure we were having a good time (and well fed!).

One Reply to “Road Trip – OKC”