The previous owners had a really nice, well kept walkway on the side of the house  starting from the garage all the way back to the patio.  They laid it out really well, with stepping stones on top of pea gravel.  They also planted these tall flowers along the fence that bloomed very colorful flowers throughout the fall, spring and summer seasons.  For the most part, we did a pretty good job keeping up with it.  We would trim back the tall flowers when they came over the walkway and I would week-wack the weeds that would cut it’s way through the pea gravel.  Then things got a little crazy.  For some reason the weeds under the walkway just started to take over.  I would do my regular week-wacking, but it wouldn’t get it all and if I would even try to get deeper into the weeds, the pea gravel would shoot out and cut up my legs.  After a while, the once beautiful walkway turned into this:

As you can see, it wasn’t pretty.  It also wasn’t pleasant trying to walk through this either.  After a lot of thought, we decided to start from scratch and clear out the entire mess: 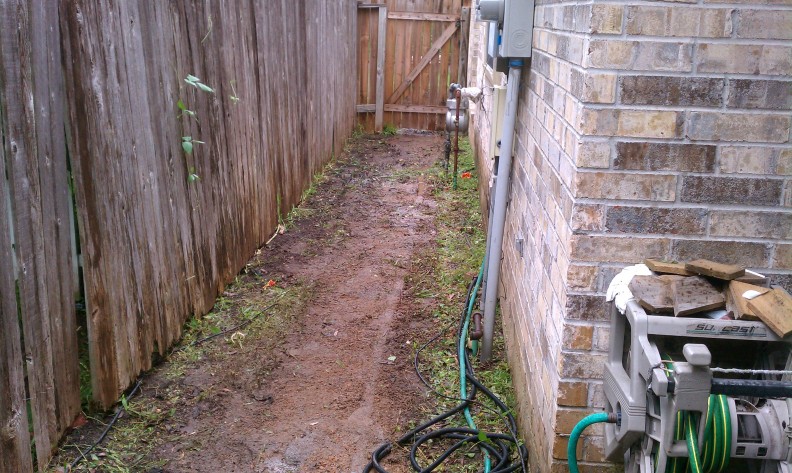 Now that we had a clean slate, we needed to decide what we should do with it.  The thought was to re-create what was already there… a clean stepping stone walkway, but the worry was that it would eventually turn back into the juggle that we just cleared.  We finally decided to simply re-sod the walkway.  In the grand scheme of things, we eventually plan to make this house into another rental.  If the walkway was too much work for me (the homeowner) to maintain, then I could expect a renter to just let it grow like crazy and I would be hit up with the HOA fees.  After that realization, laying new sod didn’t seem like too much of a sacrifice.  With my trusty trailblazer, uhaul trailer, shovel and wheel barrel, I was able to knock out the job in about 3 hours.

First I laid out some fresh dirt for the sod to settle into.  Then it was just a matter of throwing down the pieces of sod to cover the ground.  While I was doing that, my pops came by and did a little more work on the patio by demolishing some more of the concrete.  Here’s the finished product of the walkway: 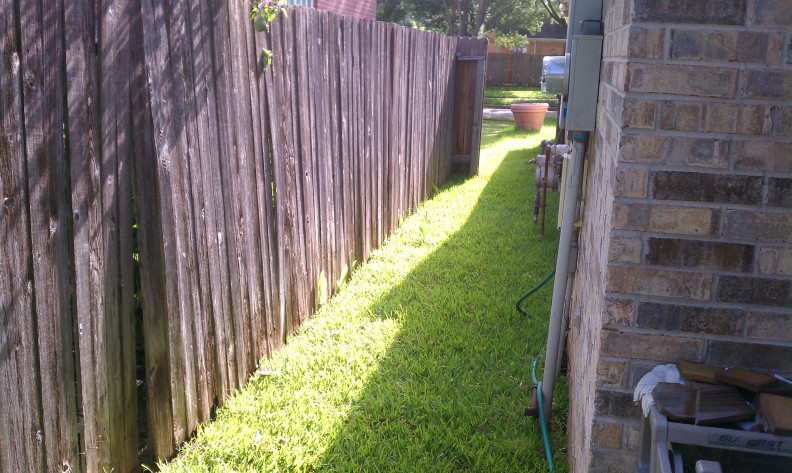 After I was done, Sheena, Layla and Mom came back from Houston Garden Center and began planting all the plants they purchased.  I was beat from the work I did, so I showered up and watched Layla while they did their thing.

All of these projects are tiring and take up a good chunk of my weekend, but it’s nice to see progress.  Next project is to replace the fence…