This past weekend, my parents, Sheena, Layla and I jumped in my Dad’s Honda Pilot and made our way to Dallas.  There was no particular reason to go other than the fact that my Dad just got his new SUV and wanted to put some miles on it.  Sheena and I saw it as a chance to see a bunch of my family (on my Dad’s side) and have Layla meet them all.  We were a little nervous since it was Layla’s first long road trip, but we had to do it eventually and since my folks would be with us, it’d make things easier in dealing with whatever may come up.

So on Friday around 1:30pm, we all piled into the Pilot to head out.  Before we even left the driveway we had our first mishap.  Sheena sat on a bottle of lotion and it exploded all over the seat.  So after 15 minutes of clean up, we then officially headed out to Dallas.  Things were pretty smooth and Layla slept through most of the ride.  About halfway through the trip in Madisonville, there’s a Buc-ee’s Gas Station. 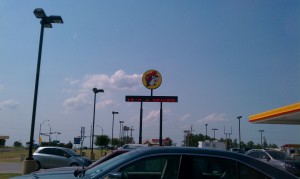 I think my parents were more excited to go there than to visit the family in Dallas!  It also gave us a chance to get Layla out of the car seat and stretch a bit.  After Buc-ee’s, we had to make another stop cause Layla started to get fussy.  I think she would have eventually gotten over it, but my folks couldn’t bare to see her cry, so I pulled over at a rest stop.  When I remember rest stops, they were basically crap holes that you really didn’t want to “rest” at.  This rest stop was a park!  It had a really nice playground so we decided to check it out.

We got about 20 minutes away from my uncle’s house and Layla couldn’t take it anymore.  I don’t even blame her.  With the traffic and pit stops we made, we were getting close to being on the road for 6 hours!  So I pull over… again.  This time at some car dealership, just to get her some fresh air.

Around 7pm we finally make it to my uncle’s house.  It was relatively late, so after hanging out with the family for a bit we just ate dinner and caught some fro-yo afterwards for dessert, then just kicked it back at the house.

We’ve got a ton of family in Dallas.  My Dad has 10 brothers and sisters and a great majority of ’em live in Dallas, so there were a lot of people to see.  Luckily, my lil cousin Nisha was getting baptized that weekend, so with an event like that, it brought a majority of the family out, so we were able to see everyone in one event.  That was great because driving all around Dallas with an 11month old wouldn’t be very fun, especially after having her in a car seat for 6 hours!

My good friends Sheil and Maya live out there as well and just had a baby named Serena.  So we were lucky enough to be able to go visit them 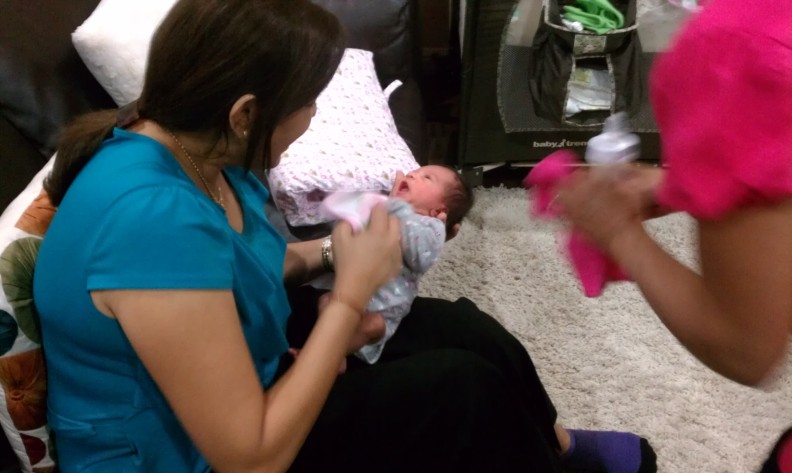 After that, we visited another one of my good friends, Neil (which is Sheil’s twin).  We had some trouble getting a hold of him, so we stumbled upon a park, so we kicked it there a bit while we waited for Neil.

While hanging with Neil, we scooped up some In and Out Burgers.  I haven’t had one of those in 12 years!  It wasn’t as amazing as I remembered it, but it was still pretty satisfying.  We finally ended our Saturday back at another uncle’s house were we stayed up a bit and caught up with some family.

Layla had an amazing time.  She loves all the attention she gets from her aunts and uncles.  I think all of them enjoyed spending time with her as well.

Since it took us about 6 hours to come up to Dallas, we decided to head back to Houston on Sunday morning.  Sheena and I had a 7pm meeting to be at, so we didn’t want to risk being late.  Before we headed out, we went to another uncle’s house for breakfast and then made our way back.  Luckily, the drive back was much smoother.  Layla slept basically the entire way home and it only took us 4.5 hours.  Of course we stopped by Buc-ee’s on the way back too. 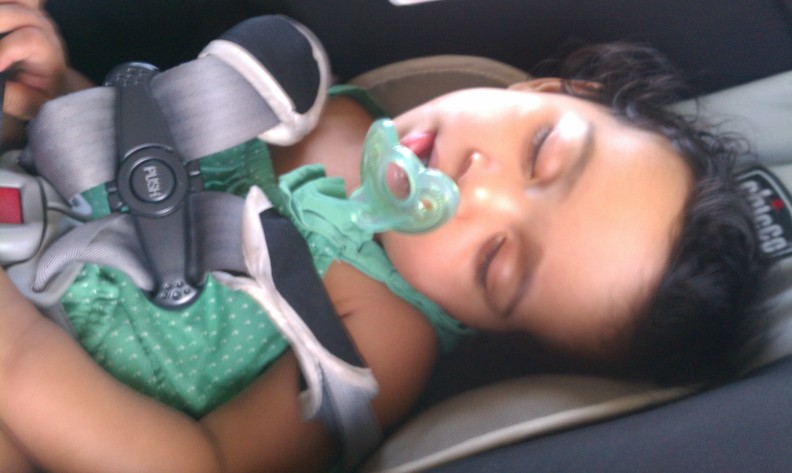 Since we came back earlier than expected, we did what anyone that’s tired would do after a long, jam packed weekend…. that’s right, we went to to aquatic center to go swimming.  Sheena was wanting to go swimming all weekend, so we jumped in our swim gear and hopped in the pool.  I was pretty tired since I drove the entire way, but it was actually pretty refreshing.  After that we made it to our 7pm meeting and wrapped up our night and weekend back in the comfort of our own home.

Although it was jam packed, it was a nice weekend.  It’s always great to see family and just catch up on things.  We still didn’t get to see all of the family, so I’m sure there will be another trip in the near future.  One last note, the Honda Pilot is a great vehicle!  It’s spacious without being a road hog or hard to park.  It handles well on the highway and city.  The one my folks have came pretty well equipped which made it that much better.  After driving my Dad’s over the weekend, I’m considering getting one for us!  Seems like a great family car outside from taking the plunge and getting a minivan.

One Reply to “Road Trip: Dallas”