I’ve been needing a workbench for a while.  I tend to get caught up in random projects that I want to do and simply makeshift a space to get it done, which usually means working on the floor.  After my last project (the side bar table), I realized that it wouldn’t take that long to create a workbench.  I also realized that it would help organize my garage as well!  With that said, I started planning things out.

Currently my tools and things are in the garage.  I’ve tried my best to keep it clean and organized, but somehow, it eventually gets bombarded with junk. 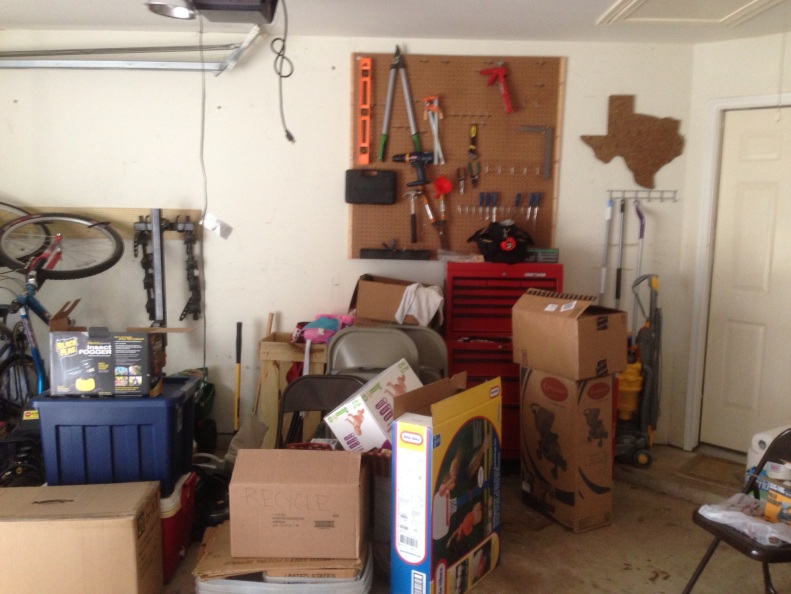 In mapping out a workbench, I needed to consider the larger tools that I currently have.  Right now it’s only a miter saw and an air compressor.  The air compressor is on wheels and could rest under the table on the floor.  The miter saw on the other hand needs to be on a shelf when it’s not in use.  When it is in use, it would be ideal that the “table” of the saw is flush with the workbench.  That would allow me to rest longer pieces of lumber on the entire workbench for more stability when cutting wood.  So that means I would need a recessed section for the miter saw.

All in all, I figured I would break it down to 3 sections.  2 small workbenches jointed together by a miter saw stand.

There are numerous plans you can find online but I decided to go with something simple and sturdy using only 2×4’s and plywood.  The tools for the job are basic as well, but the key element will be my Kreg Pocket Hole Jig.  This will allow me to make solid and seamless joints between each 2×4.

But first things first.  Clear up the area where the workbench will go.

I dont want to bore you with the details of what was done, so here’s the (almost) finished product

I say almost finished because per the plans I drew up, I need to add shelves to the workbench for more storage.  Clearly I have the space for it, but I ran out of time.

It’s not the prettiest thing out there, but it’s a workbench, so it’s supposed to be ugly, right?  I’ve got some more plans for the garage, like some overhead lighting around the work area and some more shelves on the “storage” side, but this is a good start.  At least now I don’t have to work on the floor for upcoming projects!