For about a year I’ve been complaining to Missouri City officials about the water that collects in front of my house.  Our house sits at the end of our street and it seems to be the lowest point of the street.  In addition to that, there are no drains on the street to collect the water.  With that, we ALWAYS have water in front of our curb.  It could be a bright an sunny day… it could have been 10 bright and sunny days in a row and we would still have water at our curb.  For some reason no matter how long it’s been between rains, the collected water would not evaporate.  With standing water comes mosquitoes.  That alone is a big enough problem to complain about.  It’s not only water that collects in the low spot at our curb, but dirt (which turns into mud) and leafs find a home there as well and decompose into more mud.  So every time I roll into my driveway, I always track in a bunch of mud and dirt.  Not to mention that when our guest park on the curb, their tires are basically covered with mud.   Not very pleasant.

Clearly it’s embarrassing to have, so I do my best in cleaning it out every once in a while.  I bought a hand pump at Home Depot to pump the water out of the area and into my grass.  Then I would shovel out the dirt into a wheel barrel and bring it to my backyard to our compost.  If you’re wondering what standing water and decomposed leaves with a healthy side of mud smells like… imagine the elephant exhibit at the zoo a few hours after they’ve had a hefty meal.

Then a man appeared.  I was working in my garage on MLK day and I saw a guy take some measurements…  Hope slapped me in the face.  I ran to him like a giddy school girl saying “sir, are you from the city?”  His response… “No, but the city contracted me to fix your problem.  They said you’ve been submitting complaints for about a year”…  Victory!… almost.

He explained to me that within 2 to 3 weeks they’re going to do a process called “mud jacking”.  This is were they basically punch holes into the concrete and pump in a bunch of cement to raise the street.  They’ll basically raise the street to a level where the water will run through the whole street rather than staying at my house.

I happend to be off on the day they came to do the work.  Here are some shots of their work 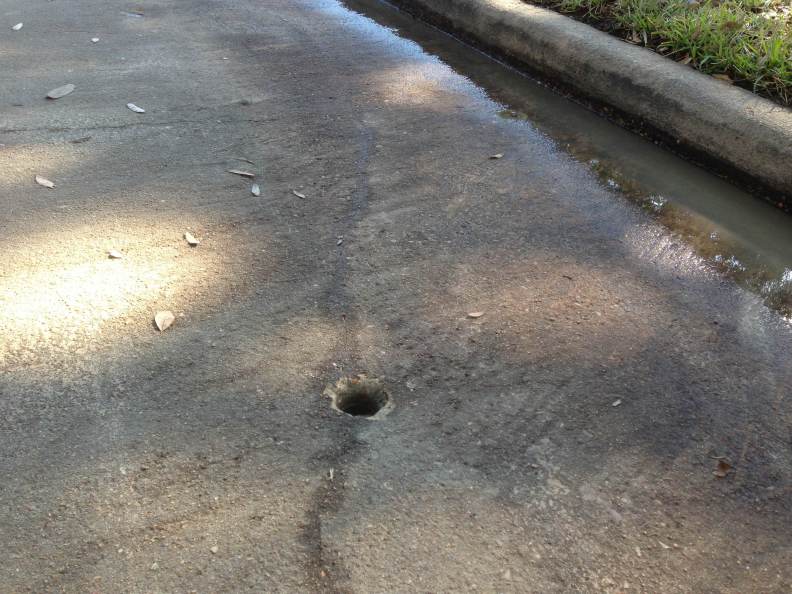 Needless to say, I’m happy.  It’s not cool that it took so long, but I’m happy that it finally happened!  I’m still waiting for a good rain to test it out, but from what I can visually see, it looks like it’ll do the job!