Yesterday was Cinco de Mayo.  It was also lil Maya’s 1st birthday party!  Earl and Asha are our close friends and they threw a party for their sweet lil girl.  The party was fun and relaxed.  The birthday girl seems to have a great time!

With pizza and cake, everyone’s a winner!

Earl and Asha set up a bunch of fun things to do outside as well.  Since the weather was so awesome, it was great that they did!  Bubbles (a major hit), sidewalk chalk, various toys… but the main event was the kite.  At first nobody really knew how to get it going.  After a few minutes of trying, Earl was able to make it soar!

It’s hard to tell in the pic, but Earl’s holding a string to a kite that almost touched the sun!

So that was Sunday, May 5th… but lets rewind to Friday, May 3rd.  Sheena and I went out to Babies R Us to get a gift for Maya.  We decided on a lil fold-able picnic table.  It was one of those items where you take the ticket to the register, pay for it and they bring it to you.  All we saw was a picture of it.  The lady at the register said that they would have to pull it from the back and it might take a little time.  She also mentioned that it was a very large box.  We came in Sheena’s car, so I said that we’d go home, get my SUV and then scoop it up.  We swapped out the cars and I dropped off Sheena and Layla at Town Square (because the weather was too awesome to not be outside).  I get to Babies R Us again and I see this massive box waiting for me.  I really don’t think much of it, but the box itself looked kinda wack.  Like it was a return item or something.  So I inquired about it and the manager assured to me that it was brand new and that this is simply how it was shipped to them.  So we loaded it up in the trailblazer and I went on my way.

On Saturday, Sheena and I went over to drop off the gift.  We figured it’d be best to do it early so that they could possibly use it at the party.  Earl helps me unload it and we open it up… as we open it, we realize that there are 4  tables in the box!

They gave us their SHIPMENT box!  I couldn’t believe it.  I couldn’t believe that they would let me walk out of the store with 4 items when I only paid for one!  So therein lies the dilemma.  I mean, if you think about it… it’s not my fault that they messed up, right?  I mean, Layla could use a table too… and possibly have 2 extra tables to leave at her grandparent’s houses… right?  So after we all celebrated with high-fives and fist bumps, we realized that we couldn’t do it.  Later that day I returned it to Babies R Us.  Needless to say, the Store Manager (not the same one I initially dealt with) was very grateful.  Sheena and I were secretly hoping that she’d be so grateful that we’d get a free picnic table.  That was not the case… but we did get a $10.87 credit for our honesty… so I guess that counts for something, right?

At least Maya has a nice little picnic table to play on.  And that’s one of Layla’s best friends, so I’m sure she’ll be using it when we come to visit. 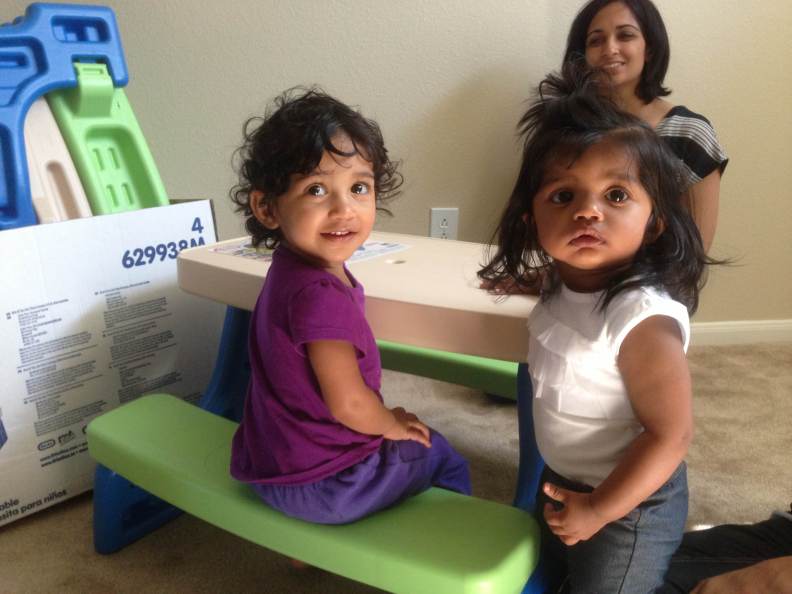