It’s over a year since we’ve moved in.  A lot of the house is in fair shape, but a lot of it still needs work in regards to organization.  The laundry room is never really exposed to the general public, but we use it so much that it should be well organized.

When we moved in, we sorta made it a dumping grounds for things we didn’t know what to do with.  In our previous home we had this Ikea cubbie-shelf-thing we used as shoe storage, so it only made sense to drop that in the laundry room.  Over time, more junk crept in. 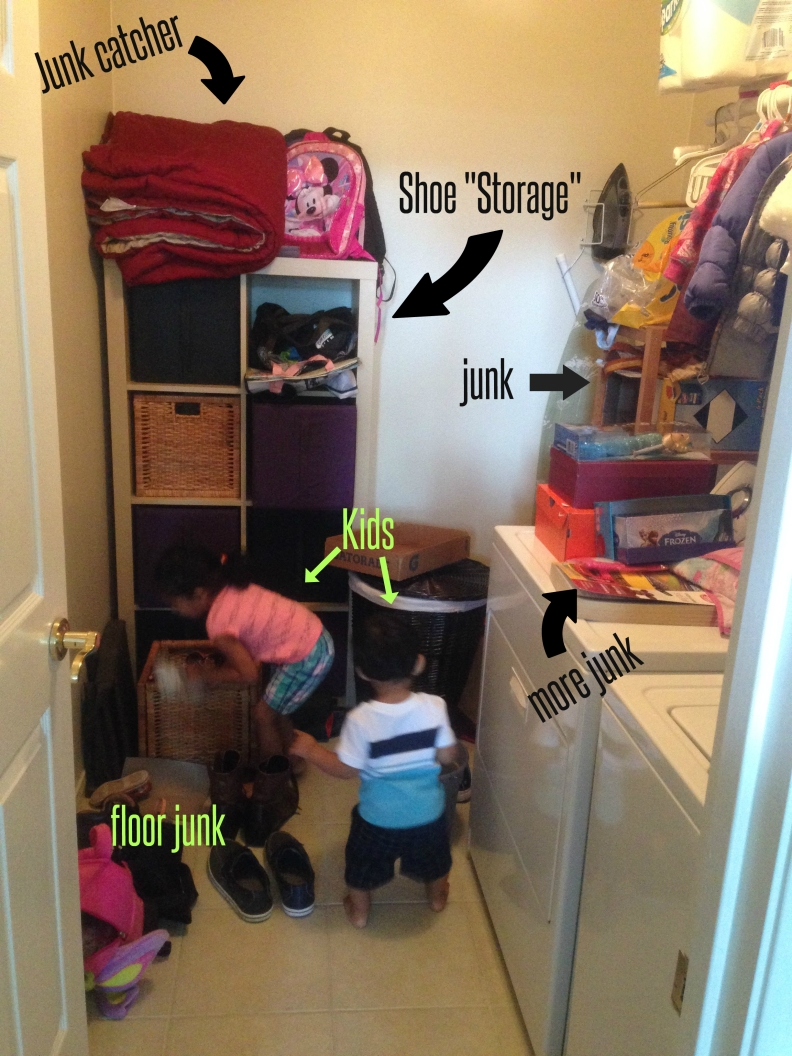 First, I wanted that thing out.  It was too big and bulky for it’s current purpose.  It also turned out that we were keeping shoes we don’t even wear because we had the space for it.  The crates inside each cubbie were filled with unused or old shoes.  With that said, we sorted out all the shoes.  Keepers, Donations and Trash.

The above pic was only Layla’s shoes, but we did the same exercise for Sheena’s and mine as well.  After we cleared all that up, I rearranged things in there to open up the space… not that big of a change, but progress none the less. 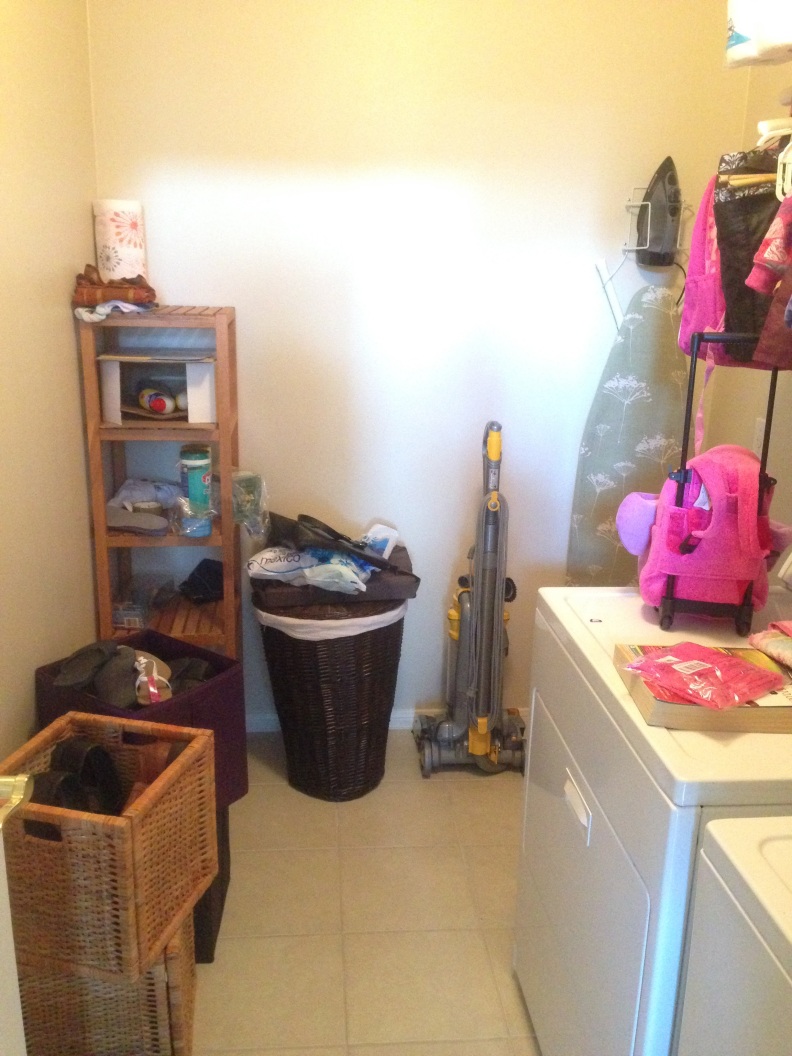 You’ll note, that we went from 8 crates full of shoes to 4 crates on the floor.  Time had passed since the above picture was taken and we fell back to our horrible, sloppy ways….

More reason to hurry up and get things organized.  To make progress, I had to clear it out again.  But this time in preparation for shelf installs. 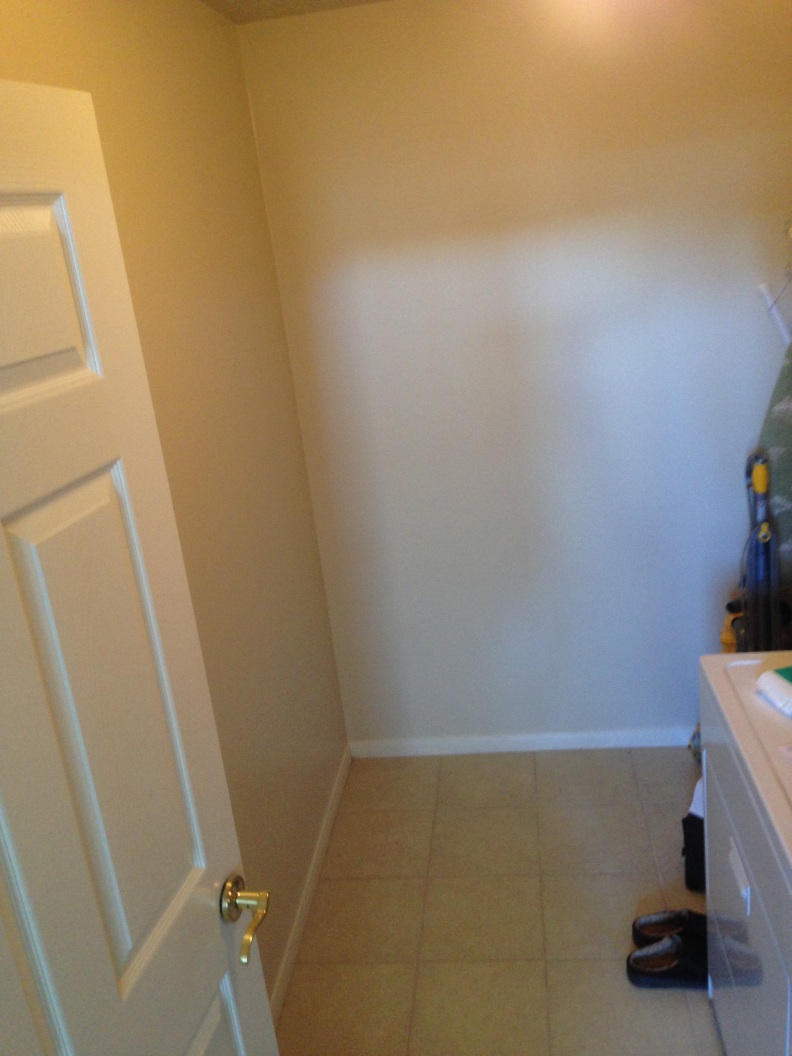 Sheena picked up a few floating shelves from Lowes, so I mounted them up.  The ideas is to keep ’em low enough for the kids to reach their shoes by themselves.  “Floating” Shelves aren’t as sturdy as shelves mounted with brackets, but Sheena liked the clean look, so we ran with it… Plus, shoes aren’t really all that heavy, so we should be OK (I hope).

You’ll note in the picture above that there’s a lot of space between the top shelf and the ceiling.  I’m planning to install another larger shelf to store larger totes.  We also mounted a coat rack as well.  The lower one is so that the kids could access it easier.

You might be asking yourself “What did you do with the old Ikea shelf?”  Well, now it’s used for toy storage upstairs in the game room.

The laundry room isn’t perfect, but it has improved a lot!  So far, it’s working well for us, but I’m thinking of a few more tweaks in the future.