The weekend before Thanksgiving, a bunch of friends that I grew up with (G-Tribe) met up in Austin, TX for a retreat.  Growing up we would always be together.  We would see each other basically everday and do pretty much everything together.  Now that we’re getting older it gets harder to meet up and just hang out like the old days, so we try to do a yearly meet up to hang out and reminisce about how life used to be and just catch up with each other.

Aaron (one of my childhood friends), is with an awesome young lady named Nancy and she opened her doors to us for the weekend.

She was such an awesome host and her house was more than accommodating!  Sheil and Maya drove in from Dallas; G, Judy, Baby Nate and Neil rolled together from the northside of Houston; Pratik, Silky, Dimple, Sheena and I packed in together and rolled from the southside of Houston and even Samir and Mindy flew in from California!  It was just great to all get back together.

I’ll spare you all the details, but the weekend was full of eating and hanging out.  We even had a field day where we played football, tug of war, jump rope and basketball.

It kinda felt like a church picnic, but still fun none the less!  We also celebrated Baby Nate’s first birthday!  He’s the first baby in our crew so anything he does is a huge deal!  I think he might be a vampire.  One time I was holding him and he gave me this huge, loving hug.  Then the next split second he bites my neck!  G and Judy say he’s teething, but I’m leaning more towards vampire..

We’re all a fun loving bunch and enjoy just being stupid with each other, so that made the weekend that much more fun!  Till the next one… 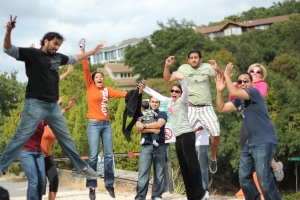 One Reply to “G-Tribe Retreat”