Since Layla’s been born our folks have taken a very proactive role as being the grandparents.  They come over all the time (which is great by the way) and they shower her with a ton of love.  Sheena and I aren’t neglected either.  They always come with food for us to chomp on or they’ll just whip up a meal for us at our house.  Dad says that Layla needs to sleep on her waterbed (his stomach) at least one hour everyday 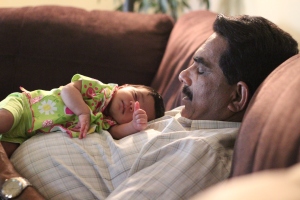 .  One day my folks brought home 10 coconuts.  They chopped ’em up, and grinded them down and with the meat from the coconut and the coconut milk they created coconut oil! 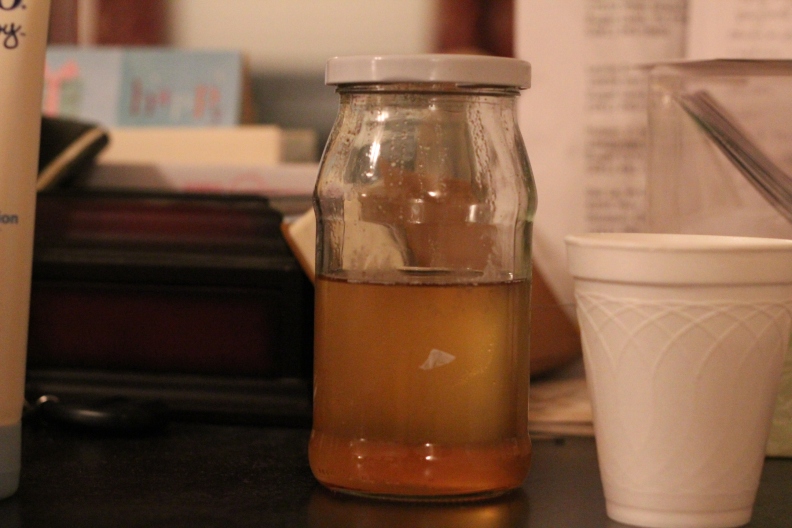 .  They said it took 8 hours to do the entire process and it produced about half a jar of oil.  I would have been inclined to simply buy some coconut oil from the store, but seeing the finished product, I can understand why they went through all the trouble.  It smells awesome (like toasted almonds) and has a warming sensation to the touch.  Its also special since it was made by the hands of her grandparents, so that’s a nice element too.  Apparently this is something my great-grandfather did for my dad and his 10 siblings.  They use this coconut oil to massage Layla before she takes her bath.  She loves it!

After her coconut oil massage and a bath, she’s set for a good night’s sleep, until her next feeding time of course.

I’m just thankful that Sheena and I both have parents that are so loving.  They are ready and willing to do anything for Layla (and us).  We are blessed!

One Reply to “Coconut Oil”