This weekend was pretty nice.  My folks were in India for 5 weeks and they finally came back on Thursday.  It was nice to see how much they missed Layla (and only Layla… I think if we didn’t have her, they probably would have just stayed in India longer!).  Since Layla hasn’t seen them in so long, it took a little while for her to warm up to them again.  I think my folks were offended, but they took it with stride and acted like a fool to gain her love back.

Friday, we opted to leave Layla with my parents so they can get reacquinted.  Shane (Sheena’s bro) bought us some tickets to the Rodeo, so we headed out there and caught the John Legend Concert. 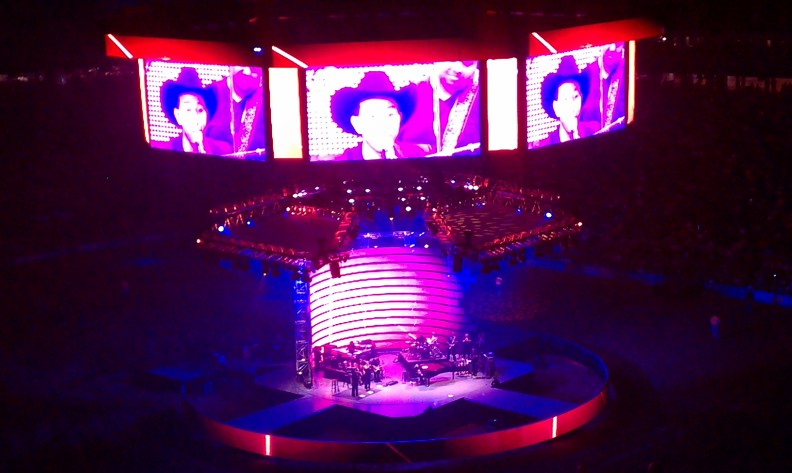 Saturday, Sheena took Layla to our friend Asha’s baby shower.  Since I was solo, I decided to get some stuff done around the house.  I started with a laundry list of things to do like change out some of the landscape lighting bulbs, clean out the house gutter and things of that nature.  But reality hit and I spent a better half of my morning only raking up leaves.  I didn’t think it’d be too huge of a job, but once I got started, it turned to be a pretty long process!  I don’t mind doing the work, but it’s not to fun when you rake up a bunch of leaves just to see more leaves fall while you’re doing it!  I ended up having 15 to 20 bags full of leaves!  Either way, it gave me peace of mind to know that its cleaner than it was before.  Hopefully next weekend will be nice enough to do my other chores!

That night our friend Earl (Asha’s husband) had a “Daddy Day Out” on Washington.  I’m not really into the scene out there, but I actually had a pretty good time.  I guess it’s really about the people your with that dictate how much fun you’ll have.  If you’re not familiar with “Daddy Day Out” its something that another friend sorta made up for everyone that’s about to have a baby.  Girls get to have a baby shower, so this is just something for the dudes!

Sunday was pretty chill.  My parent’s brought back a ton of indian outfits for Layla, so we dressed her up in one of those for church.

It was a little snug on her, so we’re gonna try to get as much use out of it as we can!  After church a few friends grabbed some lunch at a new Indian restaurant near the house.  The name slips my memory but it was pretty good, but nothing remarkable.   Sunday evening, Pokie set up a volleyball game at our church.  The church built a volleyball court a few months back, but the weather is finally getting nice enough to use it.

So overall, a pretty nice weekend.  I just like the idea of soaking up the weather while it’s nice.  We only get a few weeks of awesome in Houston before it turned to 100 degree temps!  Enjoy it while you can!

One Reply to “Weekend Review”