Last Saturday (April 6th, 2013), we had an outreach at a church in Fresno, TX.  Fresno is basically between Missouri City, TX and Pearland, TX, so it really wasn’t too far away from us.  We found out about the Food Fair through Sheena (who’s the PR Director at 2nd Mile Missions Center).  The opportunity came for us to volunteer in sorting and handing out fresh fruits and vegetables.  I’m the youth director for our church and we started a new thing called “The Gathering” that caters to the youth and young adults of our church.  We conduct bibles studies, meetings, worship nights and outreaches.  Since the opportunity to serve came up, I figured we could jump on it.

So early Saturday morning, a group of 15 people from our church along with some close friends went out to Crossing Point Church in Fresno and got straight to work.  An 18-wheeler from the Houston Food Bank was already there when we showed up at 8:30am unloading 10,000 pounds (or more) of fresh fruits and veggies. 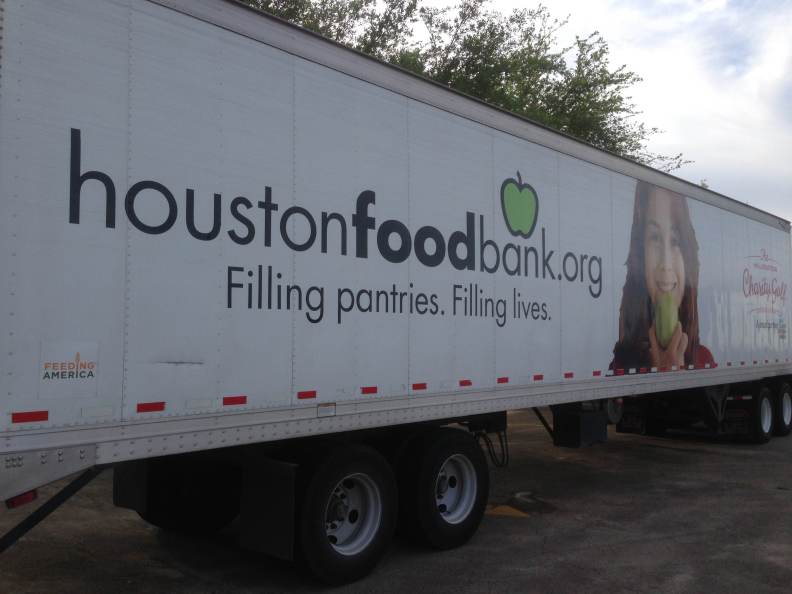 A small crew from 2nd mile was there as well to run the whole show.  Sheena was running the administrative side dealing with the people coming to receive the food.  Mark coordinated the food that was coming in and directed us (the volunteers) on what to do to get things prepared.  Not to be out done, they brought their truck as well. 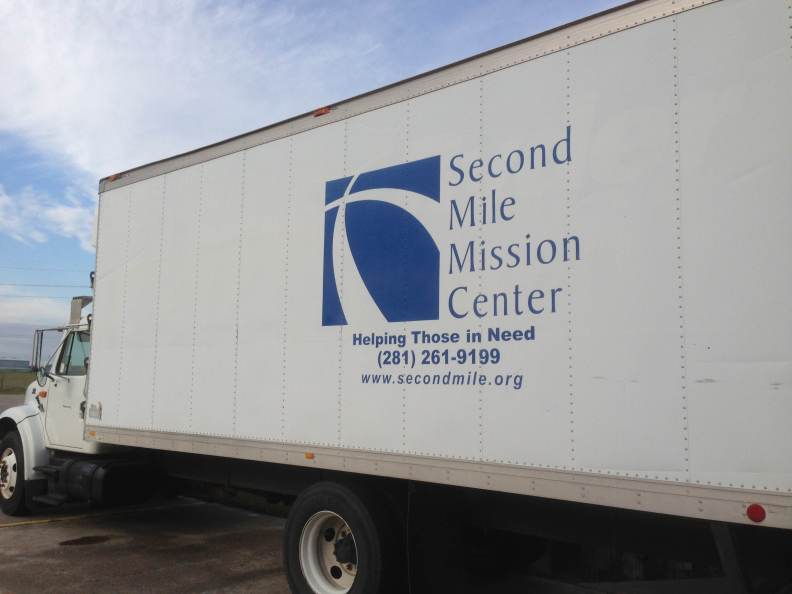 Once things got going, it was like clock work.  Neighbors would start driving in and church members would direct their cars to maximize their parking and have a proper exit strategy.  The neighbors would walk into the church and each family would get a number as they registered so that distribution of the food would be as organized as possible.  While we were out organizing the food, the neighbors were inside the church receiving a message from a guest pastor.

Once Mark took inventory of all the food, we went straight to work.  We sorted through and packaged tangerines, bananas, plums, strawberries, grapes, potatoes, yams, watermelons, and others goodies. 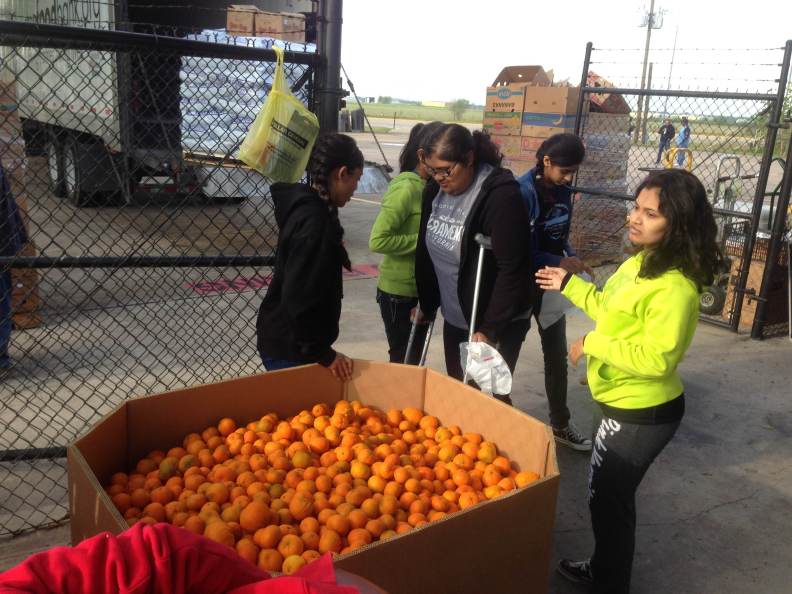 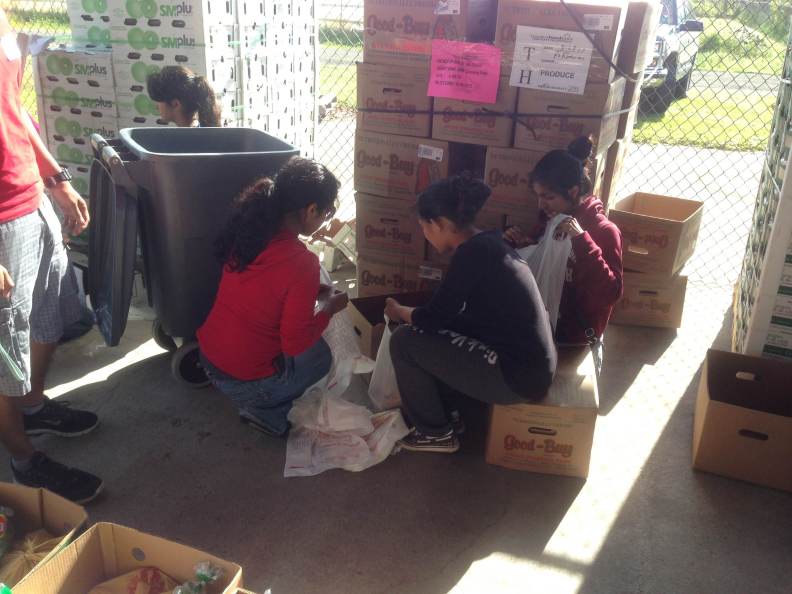 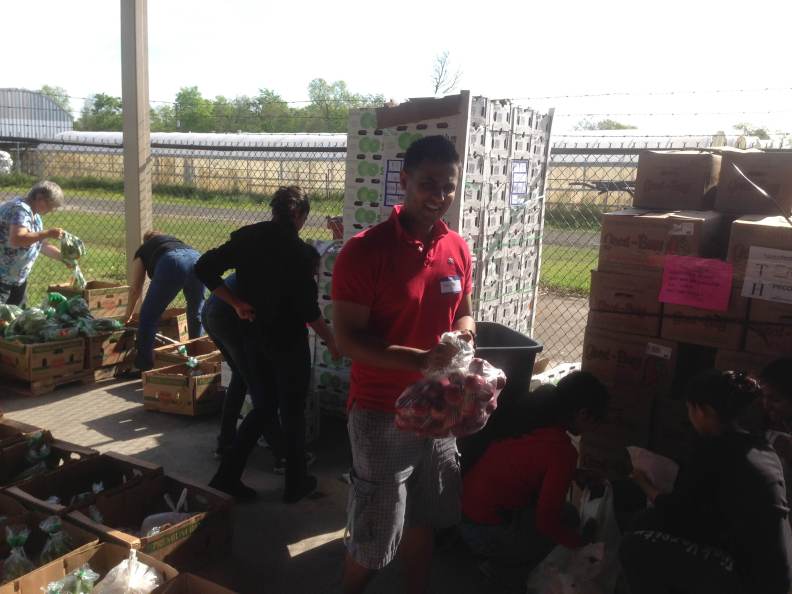 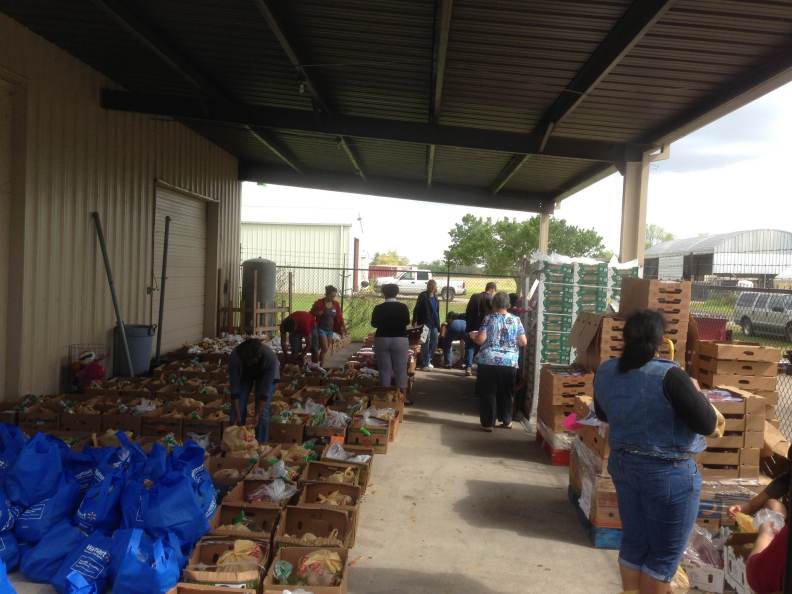 After we had time to get all the food organized we basically had 3 packages that went home with each family.  A box of the fruits and veggies, a blue sack containing 15 pounds of potatoes and another box full of grapes.

Here’s a shot of our finished boxes: 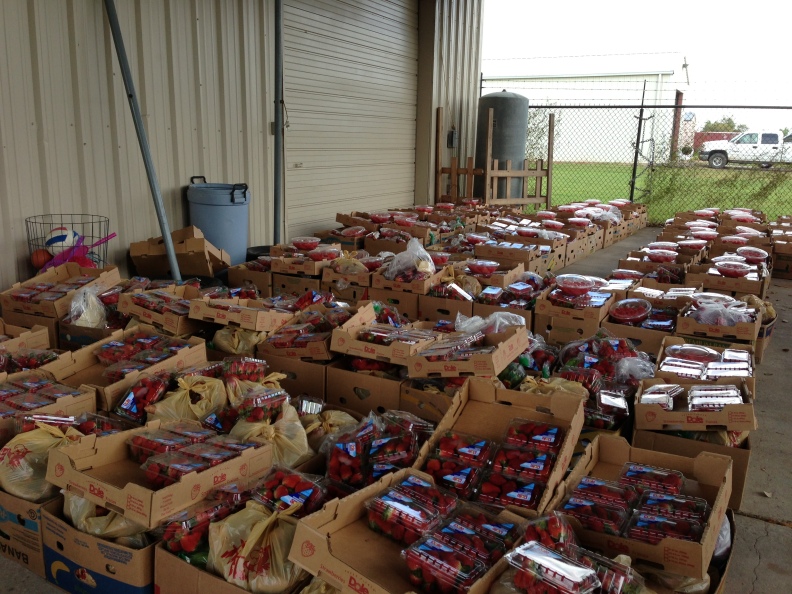 The blue sacks are the 15lbs of Potatoes I was mentioning: 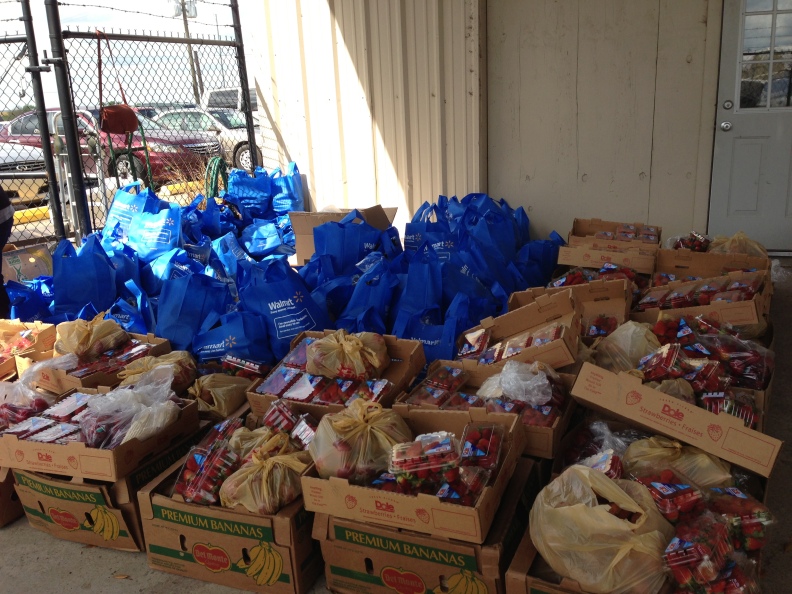 Although sorting all the fruits and veggies was a lot of work, that was actually the easy part.  The hard part was carrying all the packages to each car.  The church is located right off of Hwy 6.  The parking lot was completely full and spill over basically parked on the shoulder of Hwy 6.  Luckily we had a few carts and dollies that we loaded up and brought to each vehicle, but I wasn’t so lucky and had to carry ’em out there.  I haven’t worked out in a while, so I guess this makes up for it, right? 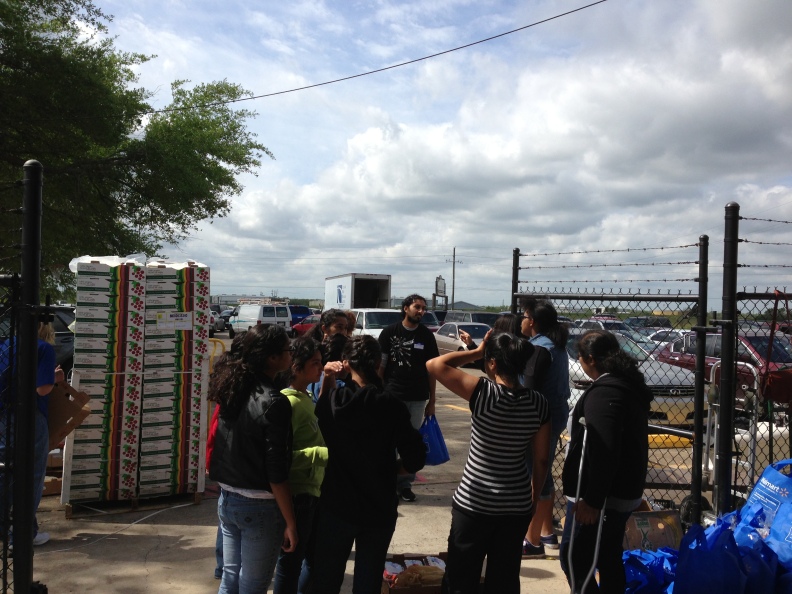 All in all, it was a great way to serve the community.  I’m super encouraged by the people that came out to serve.  They are AWESOME! 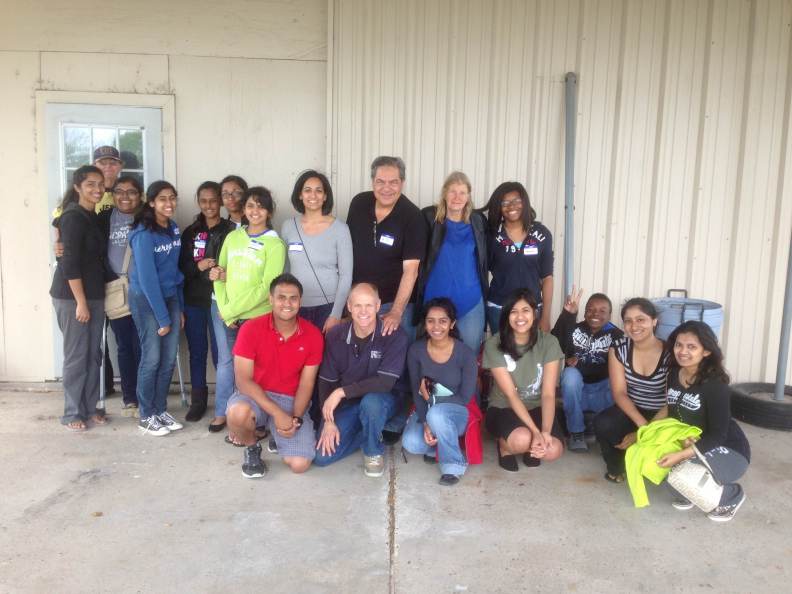 A few people had to leave early and didn’t make the group picture.  In particular, Late Lisa and No Hugs aka Snuggles, aka Sherene. 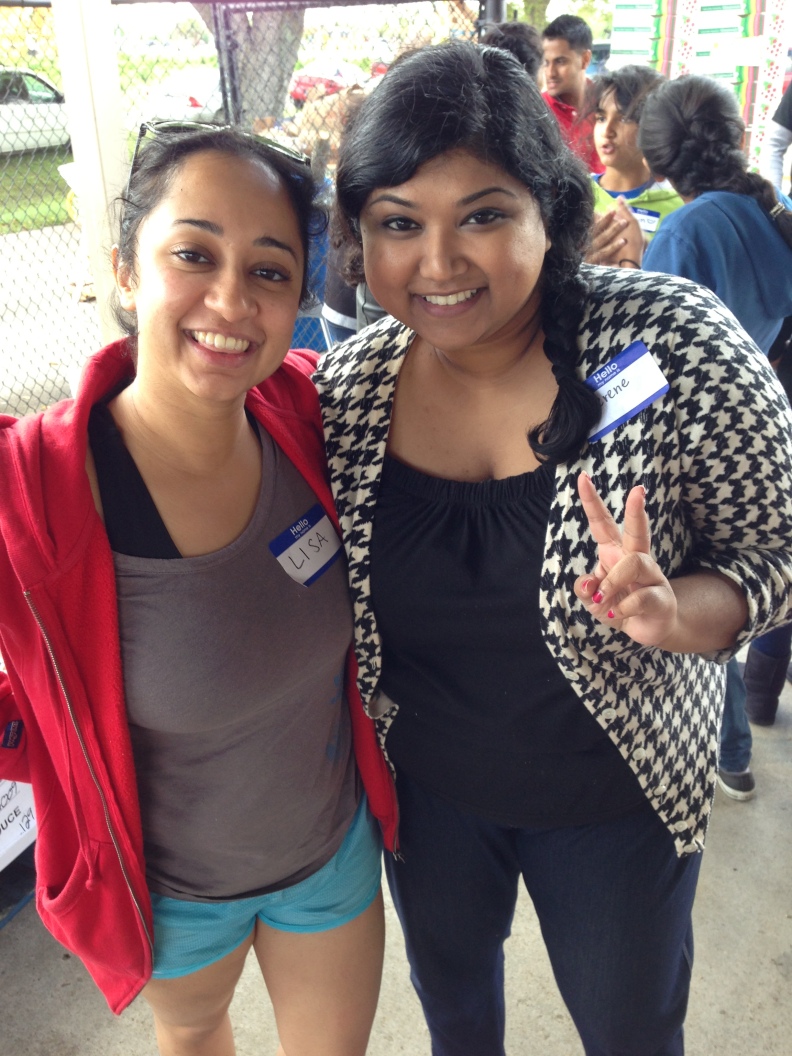 To be fair, I have to say that Late Lisa was one of the first people to show up.  So I can’t really call her “Late” Lisa anymore….  No Hugs came dressed to impress for some reason.  I have a lot of jokes I’d like to crack on them, but they did me a huge favor in actually coming and volunteering, so for now I’ll bite my tongue (but since I’m typing this, biting my tongue doesn’t really help).

Thanks for everyone that came out and volunteered!  We were able to serve almost 200 families that would otherwise not have access to fresh fruits and vegetables.  I was blessed by it and I know that you blessed others in being a part of it!