This year Halloween fell on a weekend; Me and Ghetto Boys were trick or treatin…. well, not really, but my mind was playing tricks on me!  This is our first Halloween in the new house, so we really didn’t know what to expect in regard to trick or treaters.  We got a whopping 4 groups!  I use the term “groups” very loosely.  The biggest “group” was of 4 people.  We bought a few bags of candy, just in case, so needless to say, we have a lot left over!

Layla dressed up like Abby Cadabby (a character from Sesame Street) for her fall festival, which was on Thursday.  That costume was gifted by Shane (her uncle).  We had a Supergirl costume as well, and she insisted on wearing it to school on Friday.  We obliged because it was too freaking cute.  After school, Layla got her face painted at HEB.

On the way out of HEB, she jumped on my shoulders to be Supergirl Kitty Cat! 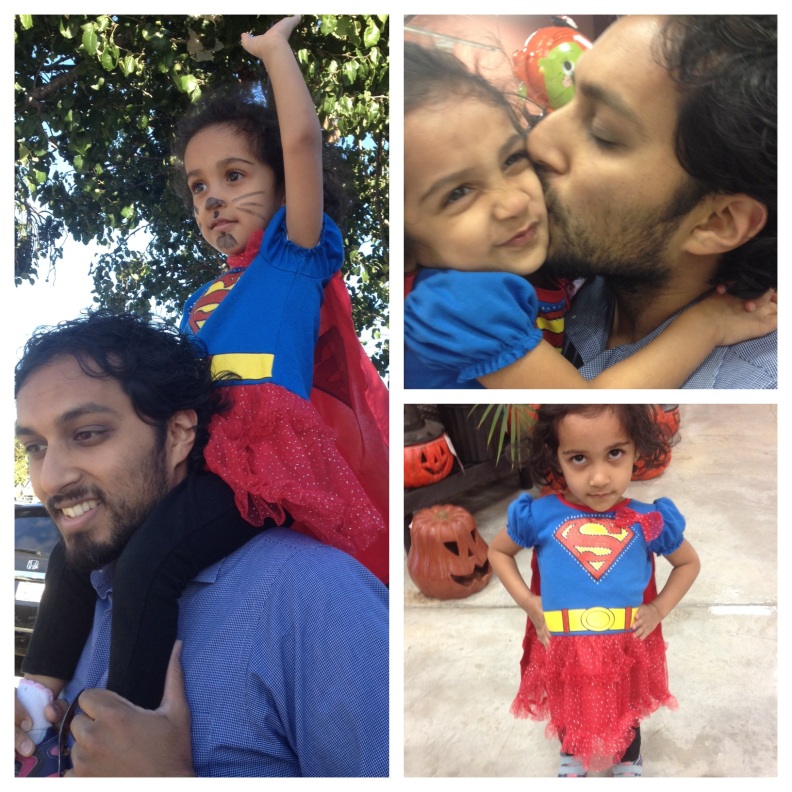 When we got home, Ezra jumped in on the Superman theme and put on his costume as well (also gifted by Shane, his uncle).

Both kiddos helped give out candy (Layla helped a bit more than Ezra, but that’s OK).

The next day our friends Jerry and Tina’s hosted a dedication for their baby boy Jeremiah.  It was great to be a part of it and see some faces we haven’t seen in a while.  After that was done we headed home to host a small birthday party at our house.  Mom’s (Sheena’s Mom) birthday was on Saturday, so we invited some family over to celebrate.  Here’s a shot of the birthday girl with Ezra eyeballing the ice cream cake!

After chopping down on some bbq and relaxing a bit, everyone eventually left.  Layla and I sat in our official Daddy/Daughter chair to break it in a bit.

Sunday was pretty chill.  After church Sheena and the kiddos went to visit some friends, so that gave me an opportunity to do some woodworking (which I haven’t had any time to do).  I have a couple of projects on deck, so it was great to get back in the swing of things!

Here’s a cute shot of the kiddos winding down on Sunday afternoon:

Have a great week!