On Aug. 5th, 2015 we joined Tim and Jess for a trip to Cancun.  Tim and Jess came over around 8pm on Tuesday night. We were still
getting the kids ready to spend the night at mom and dads house.  We dropped off the kids around 10pm.  They did fine.  When we got back,
the plan was to wake up around 1am and start getting ready to leave the house around 2am. We didn’t really get to bed until 12am. So that
left us an hour of sleep. I was a bit nervous to sleep because of the fiasco we had on our Puerto Rico trip, but with 4 of us there, I felt
that we would be ok.  Surely one of us would wake up on time!

Sure enough we got up on time, left on time and even got to the airport earlier than expected. It was a ghost town there. We waited
for about 30 minutes for the ticket booths to open to check our bags and get our boarding passes.  Then we had to wait for the security
check point to open.  After all that was said and done we had to wait again for Dunkin Donuts to open!  It was really early so I  don’t
blame them.

Our flight went from Houston to Chicago.  An hour layover, then Chicago to Cancun.

For some reason on the second leg of our flight Sheena’s boarding pass was an “A” category while I was stuck in “B”.  Luckily she was able to snag the first row seats for both of us!

Once we got off the plane in Cancun, we were greeted by what we thought was our shuttle guy to bring us to the resort.  We were wrong.  It was some random guy working for a tip… which he got.  Then we found our shuttle company, Lomas Travel and got on our way to the resort.

After a short 20 minute drive, we made it to the Royalton.

It was beautiful!  The resort was massive and had a number of buildings which consisted of hotel rooms, restaurants, lounge areas, a casino, pools… you get the picture.  And there was an awesome beach with views of blue water and white sand.

In the mornings, Sheena and Jess would take a walk along the beach.  Tim would hit the gym and work out.  I joined Sheena and Jess the first day for their daily walks.  After that, I “joined” them on the beach but, I didn’t really do too much walking. 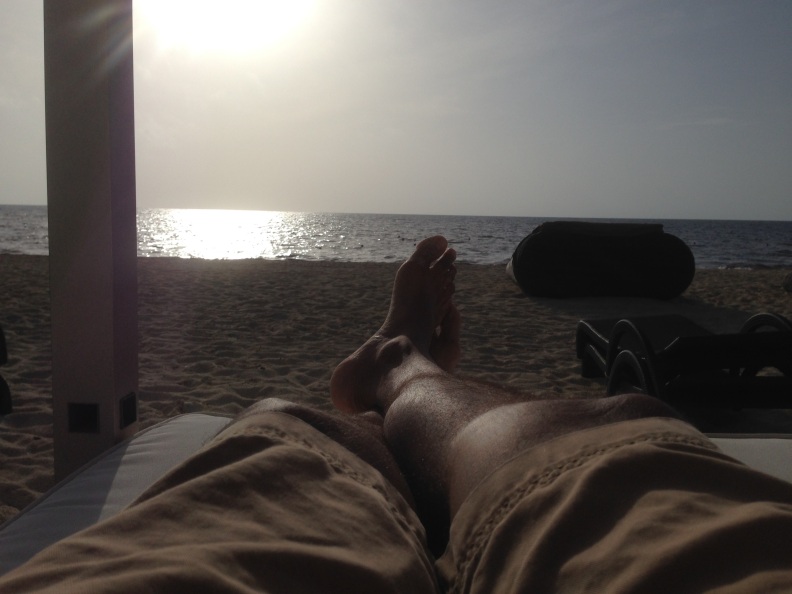 The beach wasn’t necessarily “swim-able”.  There was a ton of seaweed that covered the shoreline.  The resort did their best to clear it every morning with a large tractor, but it still left the beach in a position to just enjoy the sands and not the waters.

Here’s the view from the deck/lounge area we spent some time in.

There was a wide variety of foods too.  I wish I could say all of them were great, but that wasn’t the case.  For example, Zen (a Japanese inspired restaurant) was horrible.  The place was very hot, the service was wack, the wait was long… and to top it all off, the food was not worth any of that.  Although it might look appetizing, it didn’t taste that great.

But we still enjoyed each other’s company.

The best place was a restaurant called Dorado.  Great views, awesome service, no wait, and amazing food.  If I could change things, I’d go there every night.

There was a steakhouse at the Resort called Hunters.  Service was really good, but the restaurant was really hot and uncomfortable.  The food didn’t compare to Dorado either.  That was a bummer.

One of the nights, there was a chocolate bar set up by the pool, so we indulged.

We gave room service a try as well.  Nice to have 24hr access to food, but it wasn’t all that great (I still ate it all). 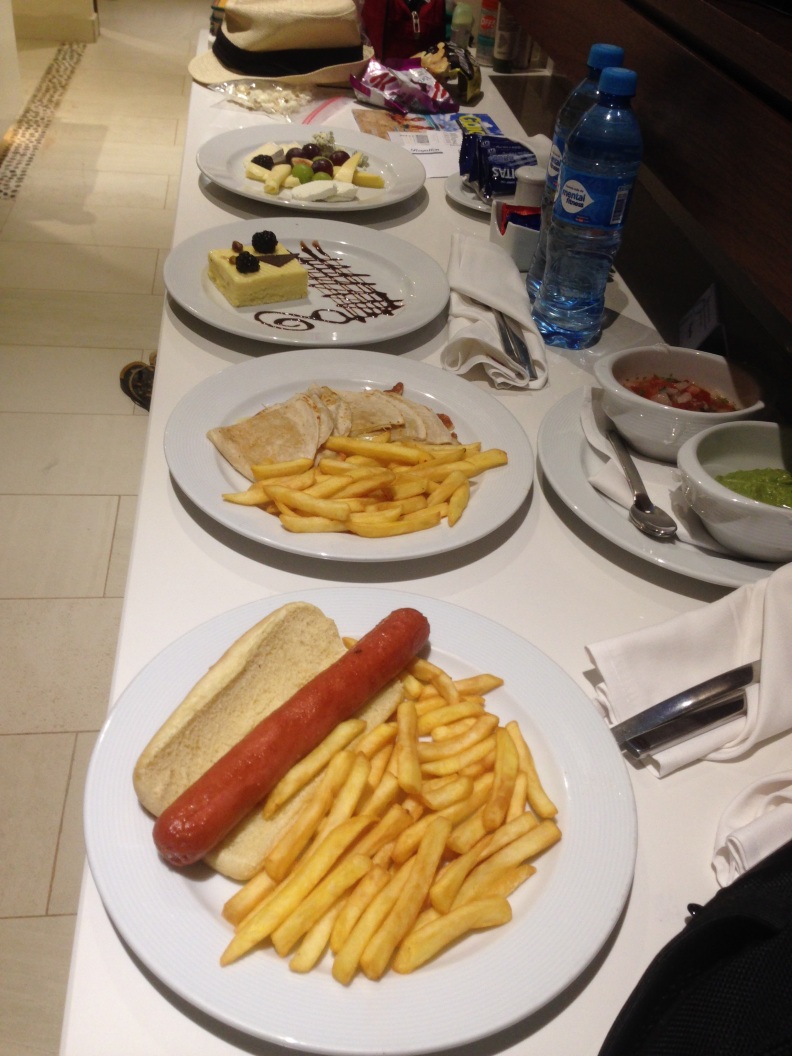 Jess was a big fan of the ice cream, which was basically accessible all day at a small coffee bar.

The technology was very impressive.  The TV had guides telling us what restaurants were open, what activities were available and a bunch of other features.  This made things very convenient for us in our planning.

Every morning, we hit up the buffet called Gourmet Marche.  It never failed us.  There was such a huge variety of things and all of it was deliciously made. 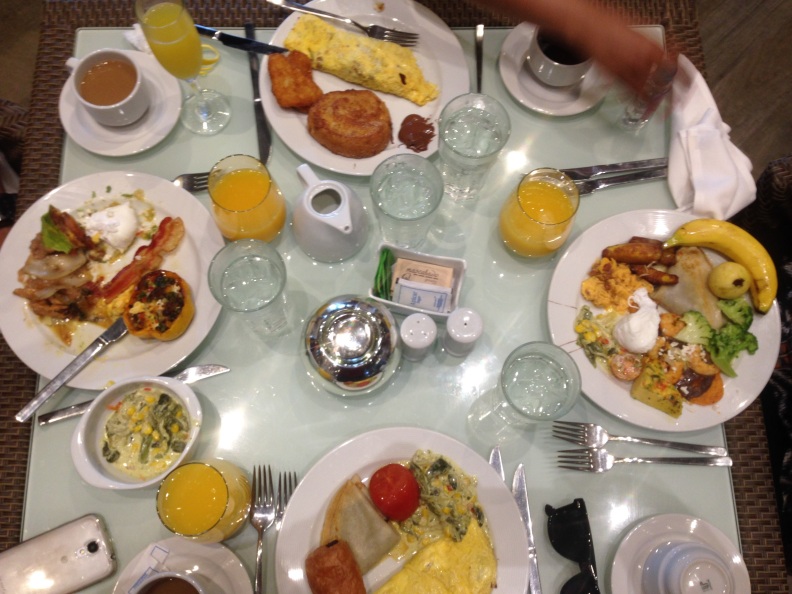 We spent a lot of time in the pool (which I wasn’t able to snap pics, because I was actually enjoying the pool!).  But we also found some hammocks and kicked it there for a bit. 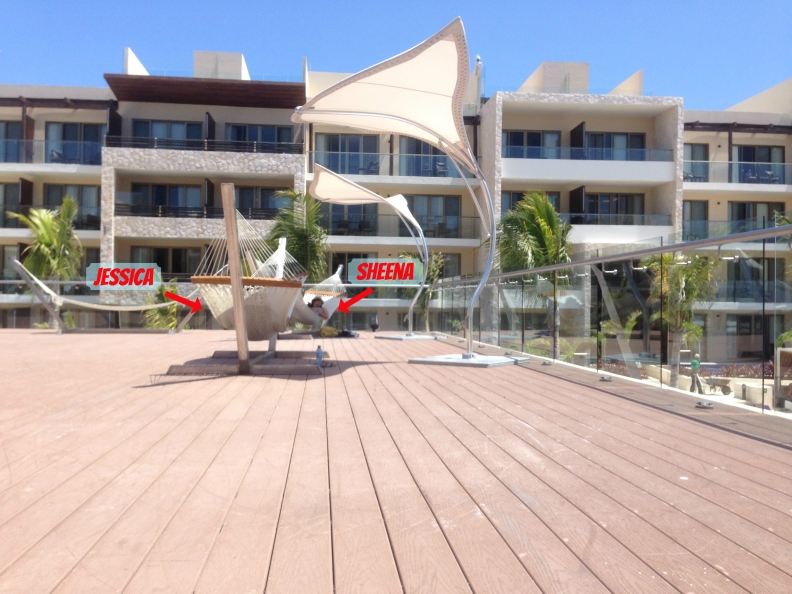 After dinner one night, we stumbled upon another deck that faced the pool/stage area. 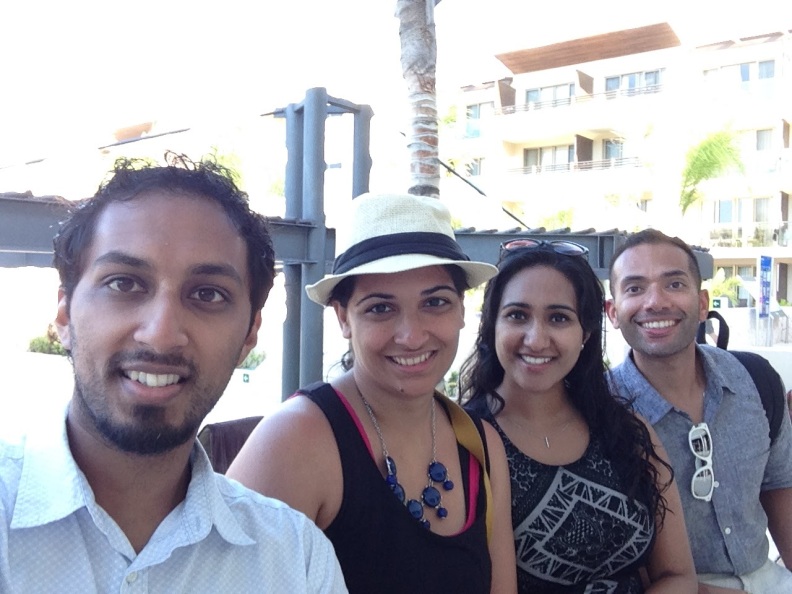 We hung out there and watched a show.

On our last day there, we went back to Dorado for breakfast.  Again, beautiful views.

Artfully designed food, but it took long to get to us, which usually wouldn’t matter, but Sheena and I were flying out that day.

After our breakfast, we finished up packing and headed to the lobby to catch our shuttle to the airport.  It was an awesome vacation.  It was great to enjoy a place like that with friends as well.

Coming home, we had a 3hr layover in Atlanta.  When we got to customs, we waited in line for the security check.  One of the security officers made an announcement to play a game.  He asked 3 questions.  Anyone that could answer the questions without the help of Google could pass up the entire line and come to the front of the security check point.

2nd Question:  “What’s Atlanta’s WNBA basketball team name?”.  Someone called out “Shock?” (yes, with a question mark because no one was really sure) and was moved to the front of the line.  Upon looking it up on Google, it looks like the answer was Atlanta Dream… but what do I know.

3rd Question:  He said that this one was very easy, so he was going to step back and whoever raises their hand first, he’ll call on.  “What’s Georgia’s state fruit?”.  My orangutan arm shoots up and I say “peach”.  He says, “that’s correct sir, step right up!”.

As we made our way to the front of the line, Sheena says to me “I feel like a celebrity”… to which I said.. “me too!”.

After we got settled in we discover we still had about 2 hours till our flight starts boarding.  To kill time and to keep our tummys full, we hit up a place called Juke Joint at the ATL airport. 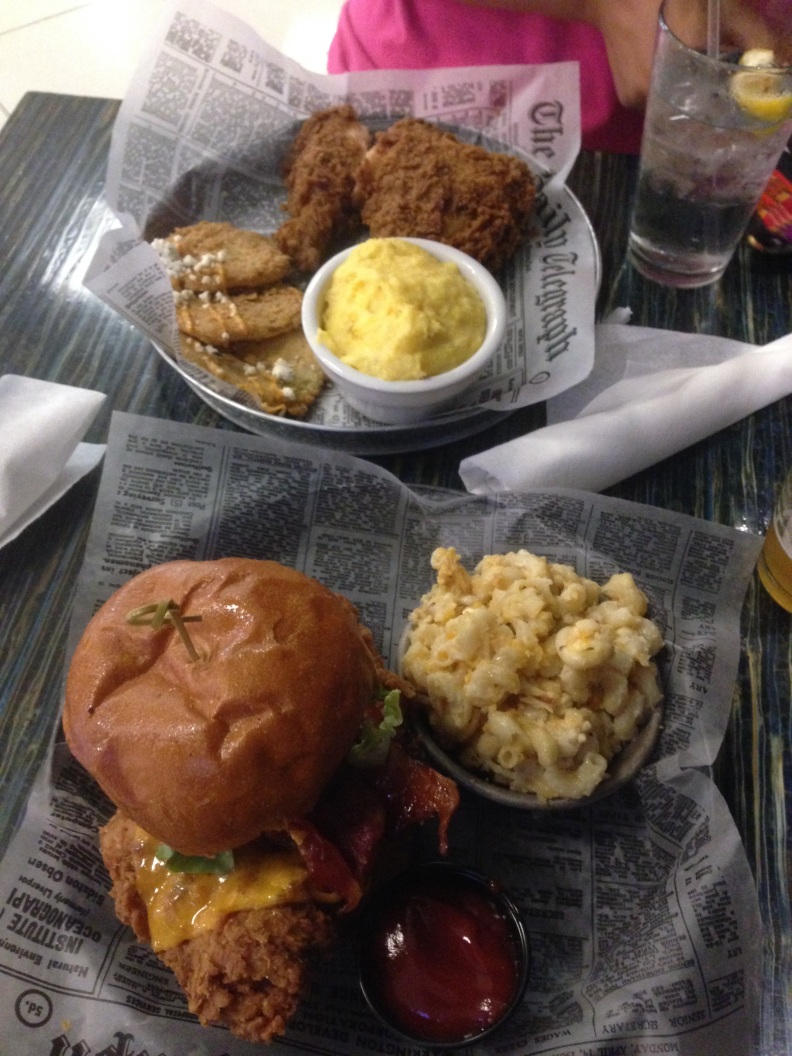 It was awesome!  I was surprised to have such good food at an airport!

There was a 45 minute delay in our flight, so we didn’t get home till around 11pm. We went straight home, unpacked, showered and went to bed.  We missed the kids a bunch, but it wouldn’t have been reasonable to pick them up that late.  Sunday after church we made our way to Sheena’s mom’s house and picked up the kids.  They were happy to see us and we were excited to see them as well.

Overall, we were gone for 4 days and 3 nights (Wednesday to Saturday).  It was the perfect amount of time to be away.  Enough time to enjoy everything the resort had to offer without getting bored of it.

But now… it’s back to reality.