It’s not much of a “makeover”, more than its an actual “make him a room” type of situation.  Sheena and I decided it’s a good time to dress up both of the kid’s rooms.  Since Ezzy’s room is vacant (sans a few exercise gear), we thought it’d be easier to start there, then move on to Layla’s room.  We ended up doing both around the same time (that’s why you saw Layla’s Room Makeover first)

I disassembled, moved and reassembled the crib (it converts to a day bed), which potentially will have to be disassembled again if it doesn’t work for Ezzy.  He currently sleeps in our guest room on a queen size bed, so I don’t know if he’ll be cool with the jump down to a kid mattress, but we’ll see.

I didn’t quite move the exercise gear out of the room yet, but I did move it out of the way… that counts… right?

Sheena picked out a few colors for the room.

We picked a winner.  I bought a sample size of the paint and threw it on to the wall.

We think it’ll work!  With some minor room prep and a gallon of the paint, we got started.  First I got all the tools and dumped ’em in the room.

Then I taped off the base boards and ceiling.  I did a small sample of the room first to test things out. 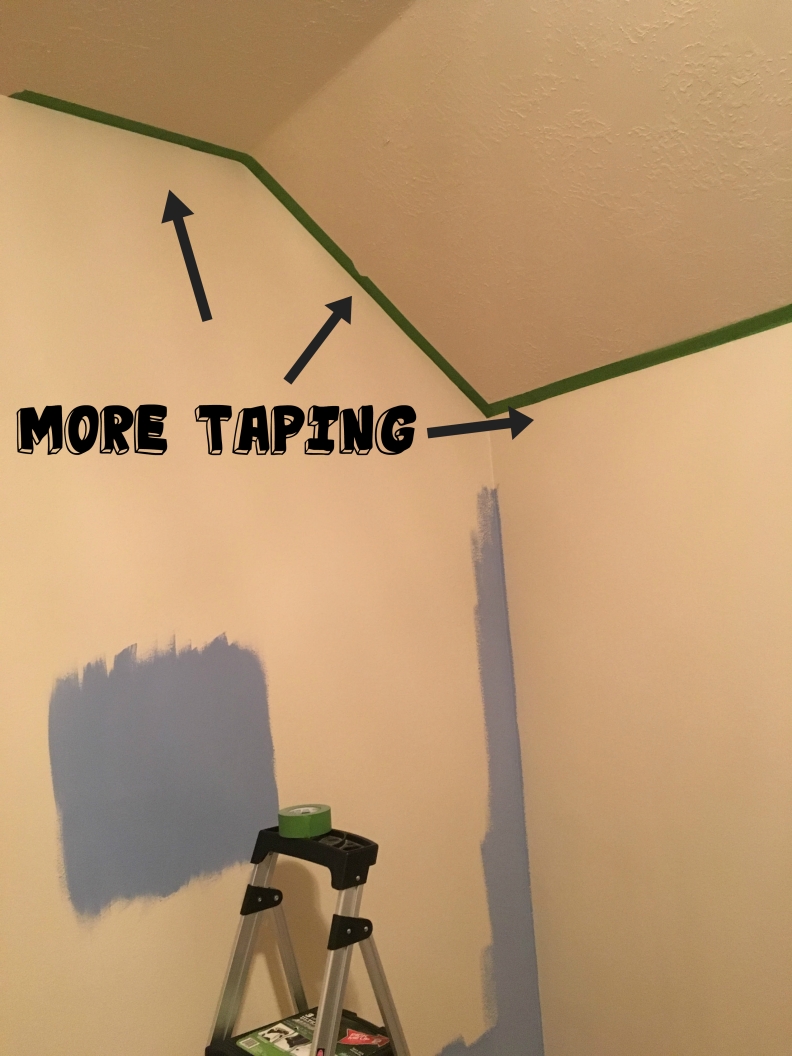 The goal in taping is to paint a straight line.  I used a brush to paint along the boarders.  I did this because if you get too close to the ceiling with a roller, you might accidentally hit the ceiling (which I’ve done before in other paint jobs).  To me, it’s better to carefully paint the boarders with a brush along a tape line, then go back and get the larger spots with a roller.

As noted above, I also removed the outlet and light switch covers and used a brush to paint  around them.  I also removed the blinds from the windows as well.  Again, it’s to avoid getting paint on things you don’t want paint on.  Here’s a pic after everything dried.

So far big sis Layla approves, so we’ll finish off the room.

I taped off the rest of the room. 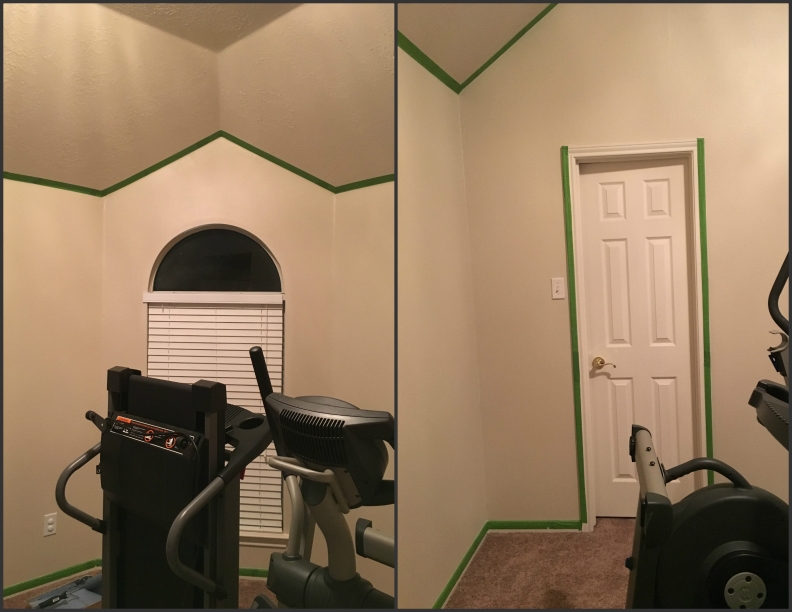 On a Saturday, Sheena took Ezzy out for a haircut, so Layla and I finished up the paint job.  Layla painted a box… 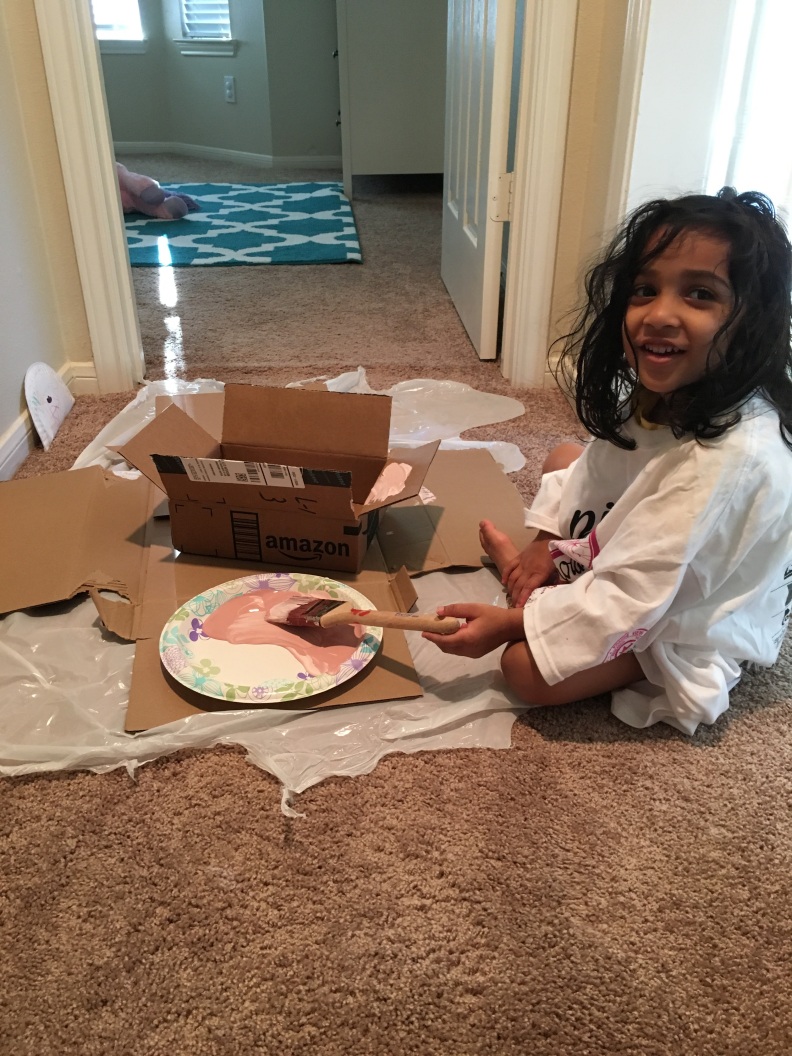 While I painted the boarders of the room.

Layla was done with the box, so she just played while I finished painting Ezzy’s room.

I peeled off the tape to see if the lines were as straight as I hoped.  They were decent, but there was still a bit of bleed through, which is not awesome, but not the end of the world either. 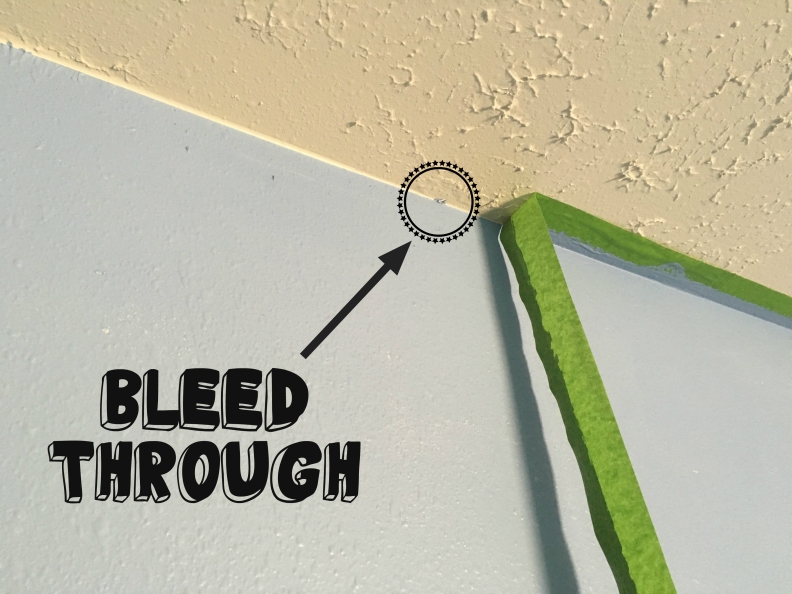 The base boards were a lot cleaner than the ceiling, but overall, I’m pretty happy with it.

The next step for us was to buy Ezzy a bed frame and put it together.

Did you know that instead of buying a box spring (going for $150ish) to place under your mattress, you can buy $40 wood slates from Ikea?  Guess which route I took….  (hint, I only spent $40).  We bought a nice mattress from Mattress Firm.

We also bought a “bed protector” because… accidents happen.

Then we drop some sheets and covers on it…

… and let the kids give it a test run.  They approve.

Then we filled it in a bit.  It’s still a work in progress, but it’s fully functional!

Ezra loves it!  He enjoys hopping around in his bed.  Both kids run in and out of their rooms while we play upstairs.  I’m trying not to crowd their rooms with a bunch of stuff and make it only a zone to sleep in.  So far it’s working, but I assume as they get older, they’ll probably want to add more things to make it their own… which is fine… but for now, we’ll keep it simple!  We do need to fill in his walls a bit though… still looks kinda boring, but overall, we’re going in the right direction.