But that was on Saturday.  On Friday, we went to Tim and Jess’ house to help prep for the party.  Nothing major, just cut out a few things, move a few tables… Really we just went there to chill with the Thomas’!

On Saturday, before the party, we headed to Blesson and Jolly’s house to drop off a birthday cake.  It was Jolly’s Birthday!  Here’s a pick of Layla and Ezra waiting for the door to open.

Whenever the kids get together, there’s so much anticipation and excitement!  Its like they never get to hang out!  After we hung out at Blesson and Jolly’s for a bit, we headed to Oliver’s party.  Here’s a pic from the end of the night. 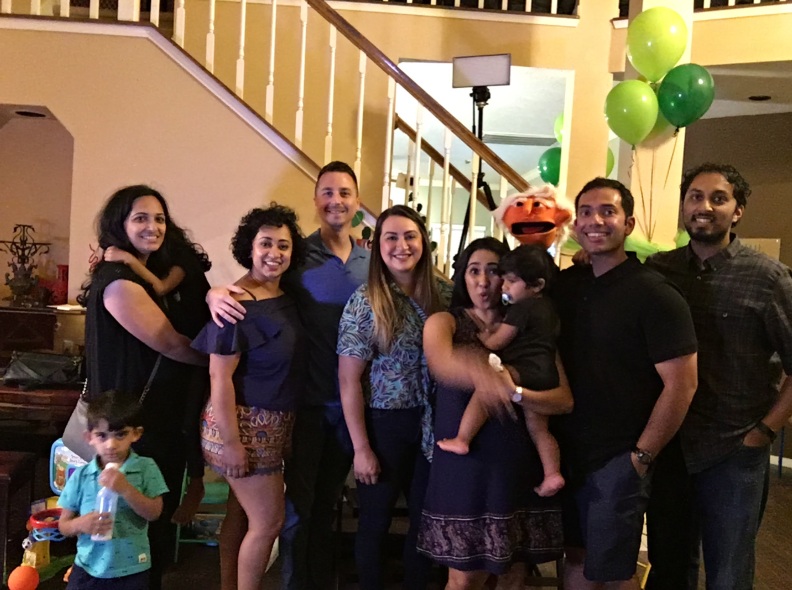 The party was a blast!  Tim put on a puppet show with his brothers, Sam and Josh!  It was awesome!  Here’s a quick highlight video of the party.

It was great to see everyone and celebrate Oliver!

The next day, we went to IPC for church.  Nabeel Qureshi was speaking so we wanted to attend.  If you don’t know his story, check him out here.

Here’s a shot of the kiddos making silly faces at church.  The church was packed, so we were sitting pretty far back!

After church we hung out at Sheena’s Mom’s house for a bit and had lunch there.  Then we did our usual HEB run.  While we were doing our weekly meal prep at home, Lisa and Matt came over!

It was fun catching up with them and getting to Matt a little more.  Overall a pretty great weekend!