My Firm participated in the the Tour de Pink this year.  I did it many years ago at my previous firm and I just wanted to do it again, so I signed up.  We’re supposed to raise some funds in connection with the ride, so I did a mini contest among my friends.  The person to donate the most money would win a steak dinner at our house.  Not the greatest prize, but we enjoy having people over, so really it’s just another excuse for that.  The winner of the contest is….. Cynthia Mani!

The day started at 4:30am.  I was already exhausted by Layla’s birthday party from the day before, but somehow I was able to wake up.  I got outta bed, got ready, and loaded up my bike.

At that time of day, there’s really no one on the road.  The ride was at Prairie View A&M, which is about an hour away.  I got there around 6:30ish and got myself gear’d up.  My number pinned to my shirt, my helmet on my head, and my butt on the bike.  I rode up to the starting line along with a sea of other people.  I wore a t-shirt and shorts, but a great majority of the riders take this seriously.  They were geared up from head to toe with jerseys, bike shorts, camel packs.. the works! 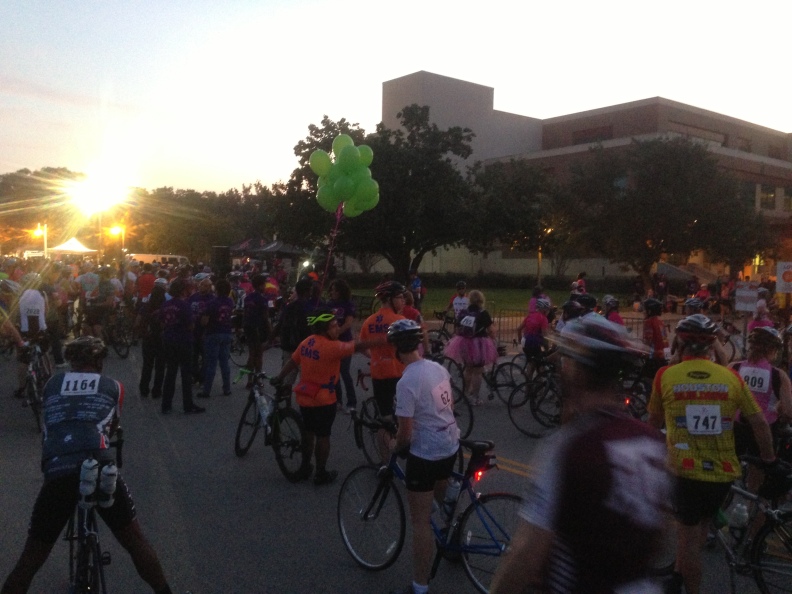 At 7am, they started things off.  The people doing 100 miles went first and they made there way through each mileage division.

The sun slowly started to peek out as my group started.

As for the race, I originally signed up to do 34 miles.  The last time I did it (when I was younger and fitter), I did 23 miles and it wasn’t too bad, so I figured I’d step it up a bit.  3 minutes into the ride I made the executive decision that I would do 23 miles.  I guess age does change things!  haha.  The weather turned out to be really great.  The hills and wind wasn’t so great!  Parts of the ride were hard due to wind and slight inclines, but overall, it was pretty enjoyable.  The 2 pits stops along the way were life savers.  They were stocked with snacks and drinks to re-energize yourself for the ride.  Upon getting to the finish line, the riders were greeted with the hoots and hollers of Prairie View students.  Not just a handful, but a large amount of students.  They were there from the start keeping things organized and rooting people along.  It kinda blew me away that young collage students would spend their Saturday morning volunteering like that.  Pretty awesome.

After I crossed the finish line, I basically rode my bike straight to my truck.  It would have been cool to stay and check out the festivities, but my folks were throwing Layla a birthday party (blog to follow) so I definitely wanted to be there.

I’m not into selfies, but I needed proof that I actually did the ride.

Excuse my busted look, but you get a lil sweaty when you ride a bike.  On the way back home I stopped by Shipley’s to get some donuts for Layla’s birthday.  She loves doughnut holes so I figured it’d be a nice surprise.

The Tour de Pink kicked my butt, but it was awesome.  Very well organized and really enjoyable.  During the ride I was telling myself that I’m not going to do it again, but now that it’s behind me, I wouldn’t mind another go at it!