If you recall, I recently wrote about an old edger I was trying to revive.  If you don’t remember it, catch up here.  I got a lot a great feedback from friends about how to try and get it going again.

Dudley Jacob said:  “It may sound dumb. But push the bubble a few times.”

Jaison “Pokie” Joshua said:  “Remove the air cleaner cover and element. Is it wet with gasoline or oil? If so, you will need to replace the element. You can start and run engine without air cleaner for troubleshooting purpose, but be sure to replace with old element or new one before actually edging.  If this doesn’t work, put it on the side of the road either on Mondays or Thursdays and that should definitely fix the problem.”

Bear Cherian said:  “Does it have a gas pump thing to prep the gas/engine?  I think we need a video of a start attempt for proper Internet diagnosis :)”

Jibbie John said:  “Bad Ignition Coil?  Might want to check if you are getting a spark.” He further added  “Run some carb cleaner”

Finny Mathew said:  “You’ll most likely need to clean out the carb and clean/replace some of the supply hoses.  The old gas will gum everything up”

Robin Thomas said:  “There is a spot in Mo City next to the middle school where I went back in the day.  They have been in business since I was a kid.  I would recommend taking it to them to see if they can get it running…”

All of the advise given was great!  But one in particular stood out… mainly because it would get the work off of my plate and on to someone else!  With that in mind, I took Robin’s advice and went to Southwest Mowers off of Hwy 90. 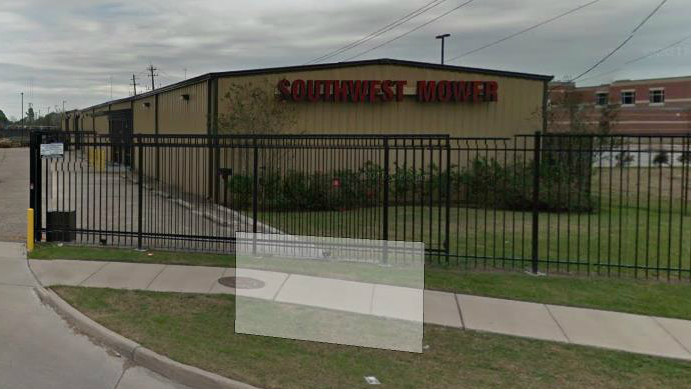 Really nice place.  Professional set up and seemingly knowledgeable staff.  I rolled the edger into the shop and the guy took a look at it.  His honest advise was to junk it, but if I really wanted it fixed, the repairs would start at $150.  That was way more than I wanted to spend, so I loaded it back up and went home.  A few days later, I did a quick online search for individuals that do this type of repair.  I came across Joe in Richmond, TX.  I called him and he’s too sick to do the work, but he refereed me to Gilbert just down the street from him.  I made the 25 minute drive and pulled up to his house…

A little house with some lawn mowers out front…. Just like he described it!  How you gonna have 10 lawn mowers at your house but have over grown grass?!  Then out came Gilbert.  A slim, older guy that sorta reminded me of Billy Bob Thorton…  Take from that what you will.  After taking a peek at it, he was saying that he’ll get the engine running again, but I’d have to change out the bearings too.  The guy from Southwest Mowers mentioned the same thing, so I agreed to it.  He said the work would be about $50 plus any parts that we might need.  That was more in my ballpark.  After working on it a day, he got the engine running! 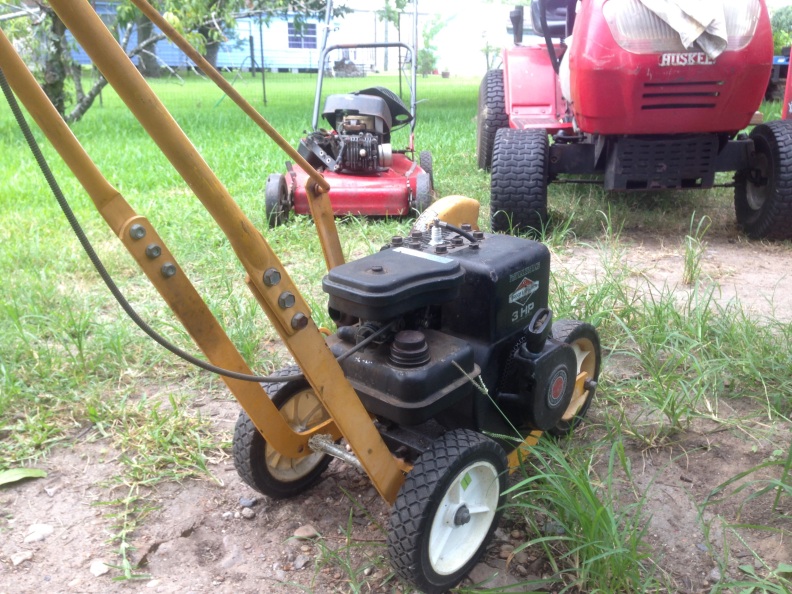 He didn’t have luck getting the bearing he needed for the blade.  He gave me the part number and I was on the hunt.  I called up a bunch of places, but turns out O’Reily’s had what we needed… BUT, each store only carried one in stock.  I needed 2 of ’em.  So I hit up the Sugar Land and the Richmond locations, got what I needed and headed to Gilbert’s house.

Unfortunately, the parts that I got were slightly off.  By slightly I mean millimeters off!  Apparently the guys at O’Reily’s gave Gilbert the wrong part number.  I went to the shop and learned they were not very helpful at all (the guy I spoke to at least).  So then I was on the hunt again.  I drove to various auto shops to find help and ended up at another O’Reily’s location deeper into Richmond, TX.  It was getting late, but I really wanted this to be done.  Luckily the guy at this location was awesome.  He went above and beyond to find the right part for me.  Searching through catalogs at his store, searching online and finally calling his support team at their headquarters.  After he determined what part was needed, he discovered that they didn’t have it in stock.  In fact, none of the local stores had it, but he placed an order for me.