This week was crazy busy! On Tuesday, Sheena and I went to a fundraising banquet for InterVarsity.  Here’s a shot of us with some friends.

Benzi George invited us out.  It was a good time!  Here’s a shot of more of our friends!

I made a quick video of it.  Check it out!

The rest of the week was the usual.  One special treat was meeting up with some friends for dinner.  Here’s a shot of Dolan and Neil.  Pratik and G were there as well! 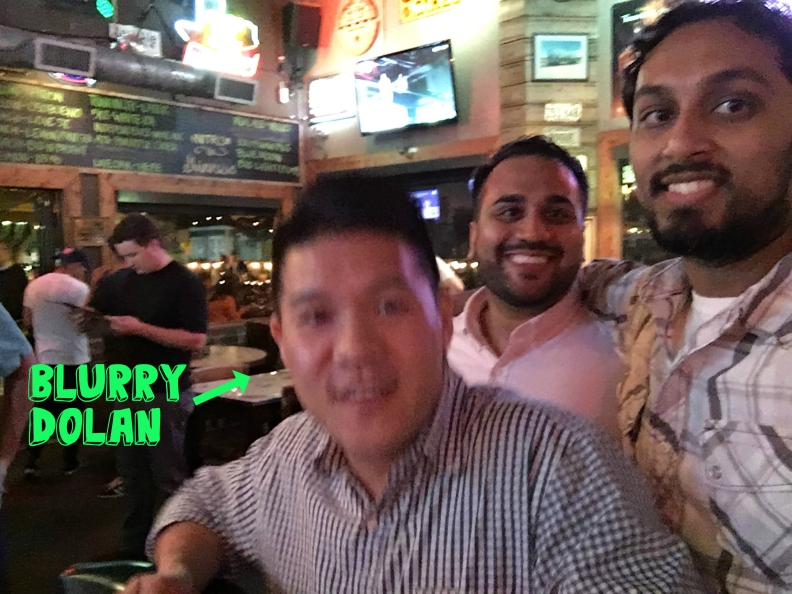 We were at Onion Creek.  I used to go there a lot during college.  Brought back a lot of memories!  Its always a good time hanging with these guys!

On Friday, I did a bunch of yard work to get the lawn ready for Spring.  Sherene (aka No Hugs) has made numerous comments on how much she hates when I blog about mulching or yard work, so I’ve refrained from writing about it here.  I actually only mowed and edged up the lawn.  After that I was exhausted, so I didn’t get to mulch or weed ‘n feed… so there’s still a chance that a mulching blog might appear this year!

On Saturday, we hosted a breakfast at our house for my Mom’s birthday.  We also took the opportunity to do an egg hunt for the kids as well.

Here’s a quick video of the breakfast.

After breakfast, we ran a few errands and did stuff around the house.  We had plans to go to Rayna’s birthday party, but it was canceled because the bday girl was sick.  It was a bummer that she was sick, but I’m sure we’ll celebrate as soon as she’s all better!

Since the plans changed, I bought some Bagel Dots and made a mini movie about the experience!  Check it out!

They’re soooo good!  If you haven’t had ’em yet, go to HEB right now and buy ’em!  Earl was nice enough to be punched in the video.  We tend to overstay our welcome with Earl and Asha, so afternoon tea with Bagel Dots turned in to dinner outside in their patio.  Earl and I just grabbed some Chick-fil-a and brought it back.

Sunday we went to church with Blesson and Jolly.  Their church had service at the Smart Financial Centre with a block party afterwards.

The production was amazing!  They did a great job!  One of the drummers was a dude I played percussion with back in collage.  It was great to see Doug jam out!

Blesson was volunteering, so after service, I met up with him.

Jay Prosh from the Houston Texans was the guest speaker.  He was taking pictures and signing autograph.  We didn’t want to wait in line, so we did the next best thing.

Sheena grabbed the kids from children’s church and met up with us.

The we headed outside to the block party.  They did it BIG!

Here’s Layla in a bounce house.

and Ezzy in a bounce house too. 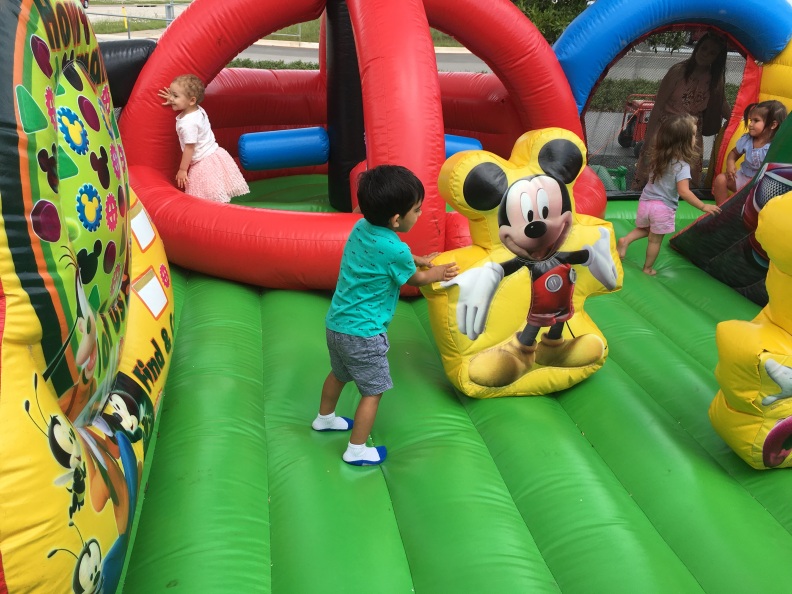 Here are some of the kids just kicking it.

and their parents too… 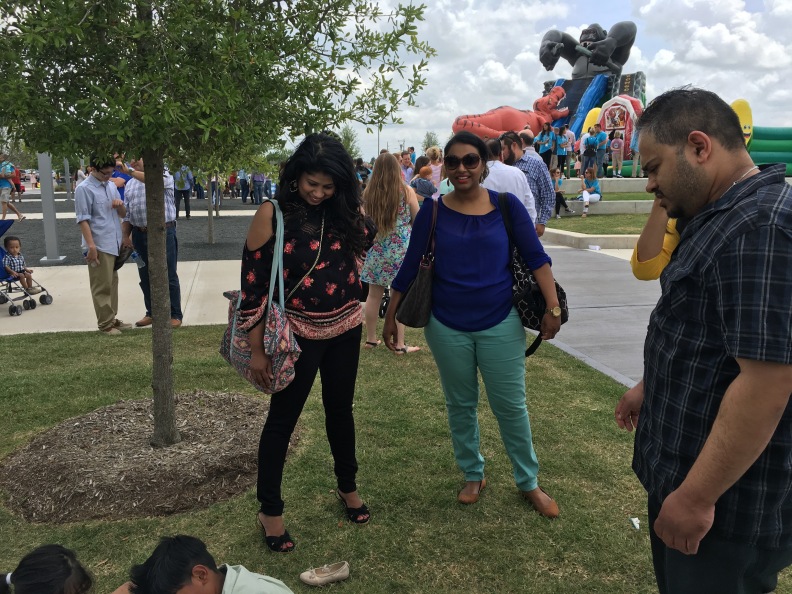 Look at this huge bounce house! 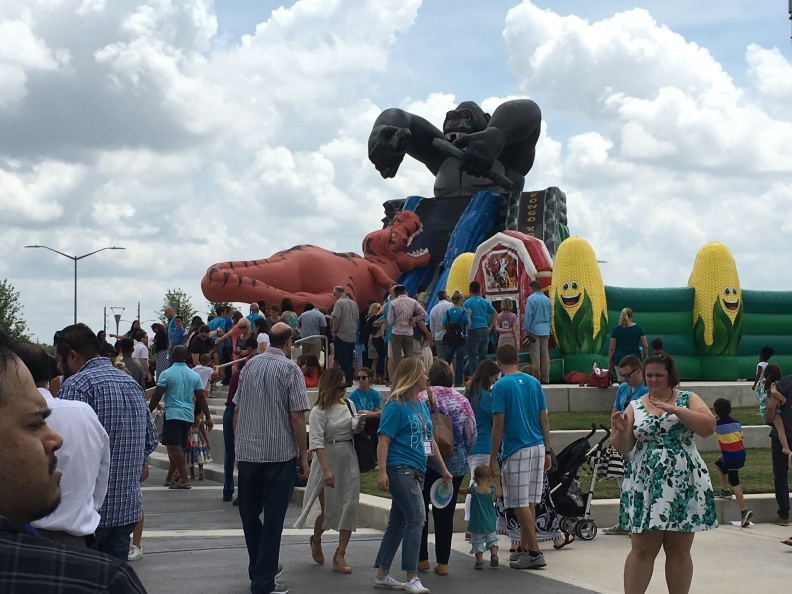 There was also a splash pad.  We didn’t come prepared with clothes, but the kids really wanted to go, so we let them enjoy. 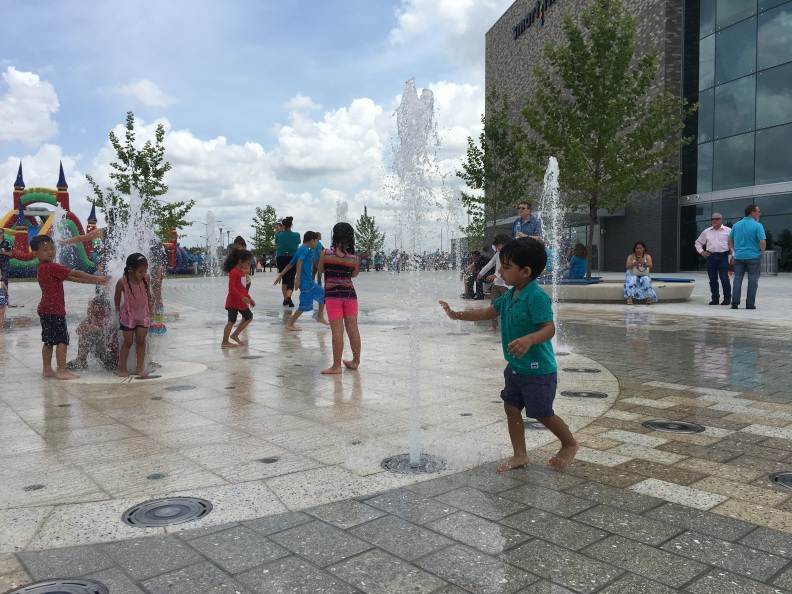 Afterwards, Bless, Joly and Shane came over for lunch.  We ordered some Sugar Thai.  Shane wanted to be king for a day, so he wore a crown. 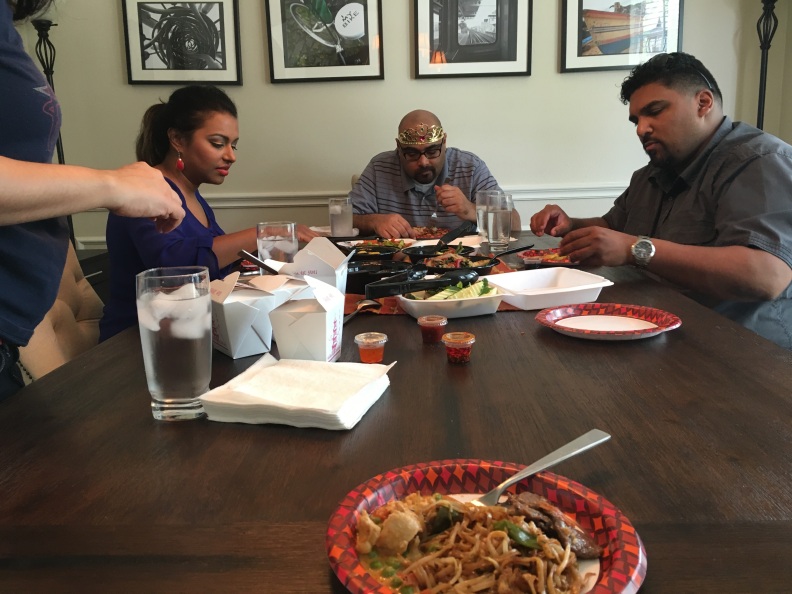 Later that day, Sheena made some chai and we drank it outside while the kids rode bikes on the driveway.  Although Ezzy has a boys bike, this Minnie Mouse bike is easier for him to pedal around.  Don’t judge me for not getting him a boy’s bike!  hahaha.

Overall it was a very busy weekend, but very fun!  Happy Easter, y’all!